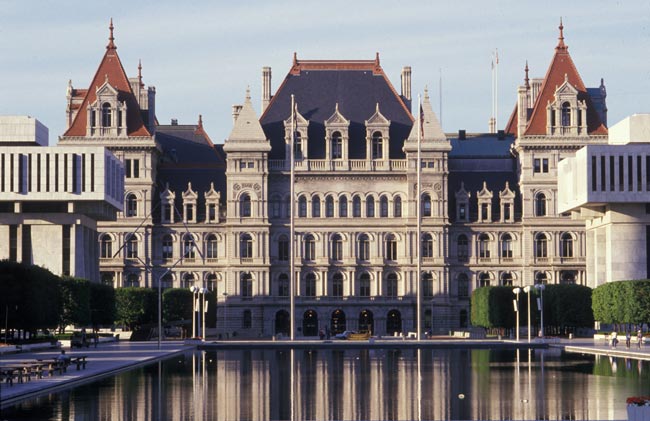 “It is appropriate to gather together to fulfill the obligation to recognize good – hakaras hatov,” said Rabbi Zwiebel. He lauded Senator Flanagan’s friendship and support for yeshivas over the many years of his public service, and his partnership with the yeshiva community. Rabbi Zwiebel then called on several speakers from the yeshiva community, who explained how Senator Flanagan’s work affected them personally.

The general tenor of the evening was mutual appreciation, as Senator Flanagan humbly acknowledged that the advocacy of Agudath Israel, yeshiva administrators, and parents are a key component in his recent successes. When asked in the question and answer session how useful Agudath Israel’s Missions to Albany are, he said, “I can’t overstate the value and importance of that… You have to keep our feet to the fire. Your continued advocacy makes all the difference in the world.”

The relationship between Senator Flanagan and the yeshiva community goes back many years, beyond the two years he has served as Senate Majority Leader to his fourteen years in the State Senate and his five years as chairman of the Senate Education Committee.

Three speakers from the yeshiva community expounded upon how these and other benefits had impacted their lives. The first speaker, Mr. Yehuda Zachter, a parent of students in Bnos Bais Yaakov in Far Rockaway, NY, said that it is a struggle for many yeshivas to balance the budget and give their children a good education while ensuring their safety. His yeshiva has been able to provide new security systems to protect their students due to recent legislation. “We are taking care of their education,” he said. “We thank you for helping us take care of their security.”

Mr. Sruli Orzel, the Chairman of the Board and President of the Yeshiva of Spring Valley, said that in the past, laying out the cost for Mandated Services, which the state is supposed to reimburse, made it difficult to balance the yeshiva’s budget. “The monies allocated this past year to help eradicate the state’s debt to nonpublic schools, has made a huge difference,” said Mr. Orzel.
He also spoke of security. “We are one of the few mosdos in Spring Valley and Monsey that has a full-time guard,” he stated.

Rabbi Ephraim Nierenberg, a parent of a special needs child, praised Majority Leader Flanagan and his colleagues in the Senate – particularly Senator Simcha Felder – for their role in instigating major changes in the way New York City handles tuition reimbursement claims for children enrolled in nonpublic special education schools. “Very often, we knew that services were out there, but they were just out of reach. Now it’s less of a struggle,” he said. “Parents now breathe easier because of your efforts.”

The strides made in easing the process for special education placements were noted several times, and Senator Flanagan himself thanked Mrs. Leah Steinberg, Director of Project LEARN, Agudath Israel’s special education advocacy office, for her work in this area. Mrs. Steinberg said, “I would like to note the devotion of Senator Flanagan. Throughout the years that we’ve worked together, he really listened as if it were his children sitting there. Thank you, Senator, for all of your help for our children.”

Rabbi Shmuel Lefkowitz, Agudath Israel’s Vice President for Community Services, said that the struggle to represent and support nonpublic schools has recently become much more difficult, and there are now legislators who seem determined to cut all funding to nonpublic schools. In such a climate, Rabbi Lefkowitz said, good friends like Majority Leader Flanagan are even more precious. He presented a plaque to the Majority Leader for his work on behalf of the yeshiva community.

In his speech, Mr. Flanagan called for the continued collaboration of Agudath Israel and the Jewish community with himself and other legislators and urged the community to get everyone to go out and vote.

Chaskel Bennett, member of Agudath Israel’s Board of Trustees, said, “It is rare in politics to forge a relationship with someone who fearlessly fights for the causes and people they believe in, no matter the political costs. First as education committee chairman and now as Leader, John Flanagan has been our friend and ally showing a tenacity and loyalty rare in politics. Activists deep in the trenches truly understand just how precious it is to have legislative leaders who place a premium on principles and friendship… It is important to remember and thank those who really stand with you, especially when things get tough. Today we had the opportunity to thank the Leader and his colleagues in the Senate for their sensitivity and determination in protecting and defending the issues vitally important to our faith-based community.”

Another politically active member of Agudath Israel’s Board of Trustees, Leon Goldenberg, said, “this was a historic gathering, bringing together top leaders of New York’s yeshiva community, representing tens of thousands of children and their families, with the person who has done so much for our yeshivas and day schools in the New York State Legislature. Thank you, Agudath Israel, for making this happen.

The evening might best be summed up in Senator Flanagan’s own words: “I believe that what you’ve done for me today is a terrific mitzvah.”