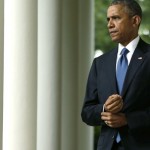 President Barack Obama has been touting the clauses in the Iran deal that put sharp limits on Iran’s ability to acquire the bomb, but the terms expire after 15 years, leaving many to question the strength of the deal.

According to The New York Times, even those who are enthusiastic supporters of the deal are concerned that Obama has oversold it in his assertion that it would “block” all pathways for the country to acquire a nuclear weapon.
It would be more accurate to say that the deal will simply delay Iran’s path to the bomb for 15 years, the Times said.

“The chief reservation I have about the agreement is the fact that in 15 years they have a highly modern and internationally legitimized enrichment capability,” California Democratic Rep. Adam Schiff told the Times. “And that is a bitter pill to swallow.”

But one expert said there was no alternative.

“Of course there are risks, and they have to be acknowledged,” R. Nicholas Burns, under secretary of state for President George W. Bush, said in testimony before Congress in favor of the deal, according to the Times.

Obama’s “most convincing argument,” he added, “is that there is no better alternative out there.”