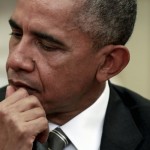 President Obama called the head of Doctors Without Borders on Wednesday and apologized for the U.S. airstrike on the group’s hospital in Afghanistan that killed 22 people.

The group, also known as Medecins San Frontieres, has called for an international investigation of the attack.

“This was not just an attack on our hospital, it was an attack on the Geneva conventions,” the group’s international president said. “This cannot be tolerated.”

The U.S. has changed its story about who ordered the strike, first blaming Afghan forces and then saying it called in bombers. Read more at Reuters.