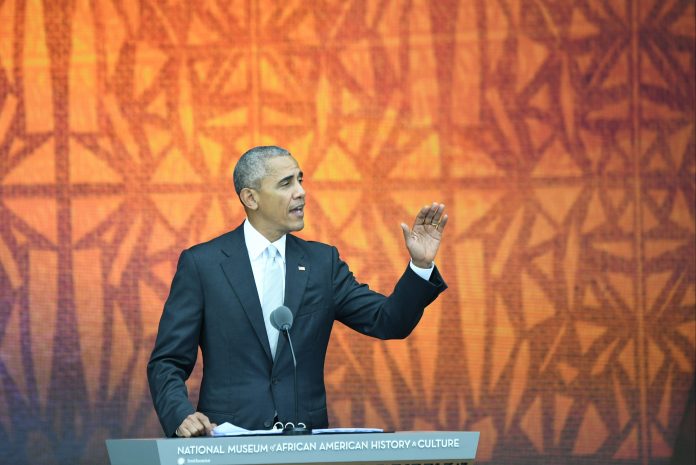 For more than eight years, Barack Obama has sought to explain the African-American experience to the rest of the country. As he inaugurated the National Museum of African American History and Culture on today, the president suggested the new institution might give both sides of the current racial divide a chance to see each other in a way that still eludes us.

At a time when multiple fatal police shootings of African-Americans have roiled cities, Obama argued that a hard examination of the “complicated” and “messy” but “glorious story” of the nation’s past could offer a way forward.

“And yes, a clear-eyed view of history can make us uncomfortable,” he said. “But it is precisely because of that discomfort that we learn and grow and harness our collective power to make this nation more perfect.”

The president’s remarks had a touch of nostalgia: he noted that while he, his wife and daughters have reveled in seeing the Mall from the vantage point of Marine One multiple times, “we don’t have many trips left.”

And during an election season dominated by name-calling and bitter divisions, the event highlighted the easy rapport the Obamas have developed during their time in office with former president George W. Bush and his wife, Laura. Michelle Obama pressed her cheek to the Bushes after walking onstage, and after the ceremony Bush casually tapped Obama to take a cellphone photo of his predecessor posing with an African-American family.

“So enough talk,” Obama quipped at the end of his remarks. “President Bush was timing me. He had the over-under at 25. Let us now open this museum to the world.”

Obama spoke directly to the violence that has come to define relations between communities of color and police, saying he hoped some of the exhibits “can help a white visitor understand the pain and anger of demonstrators in places like Ferguson and Charlotte.”

“But it can also help black visitors appreciate the fact that not only is this younger generation carrying on traditions of the past, but within the white communities across the nation we see the sincerity of law enforcement officers and officials who, in fits and starts, are struggling to understand and are trying to do the right thing.”

“A museum alone will not alleviate poverty in every inner city or every rural hamlet. It won’t eliminate gun violence from all our neighborhoods, or immediately ensure that justice is always colorblind. It won’t wipe away every instance of discrimination in a job interview or a sentencing hearing or folks trying to rent an apartment. Those things are up to us.”

And to impatient black activists who have criticized not just law enforcement but the administration itself for failing to address racial disparities more swiftly, Obama pointed to veteran Rep. John Lewis, D-Georgia. Lewis, who as a student activist led the march on Selma more than half a century ago, remains one of the nation’s most iconic civil rights warriors.

“And for young people who didn’t live through the struggles represented here, I hope you draw strength from the changes that have taken place. Come here and see the power of your own agency,” the president said. “See how young John Lewis was. These were children who transformed a nation in a blink of an eye. Young people, come here and see your ability to make your mark.”