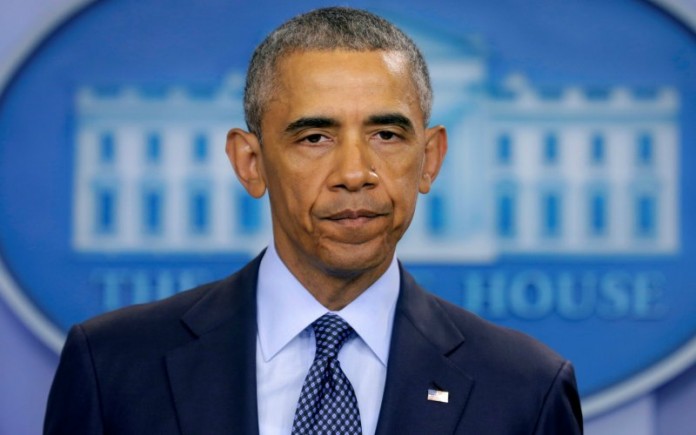 President Barack Obama on Friday offered his first response to the Republican National Convention, blasting the vision painted by Donald Trump and other Republicans of a country “on the verge of collapse” as a fiction that does not match reality.

“The one thing that I think is important to recognize is this idea that America is somehow on the verge of collapse, this vision of violence and chaos everywhere, doesn’t really jibe with the experience of most people,” Obama said during a news conference at the White House. “I hope people the next morning walked outside and birds were chirping and the sun was out, and this afternoon, people will be watching their kids play in sports teams and go to the swimming pool and folks are going to work and getting ready for the weekend.”

“And in particular, I think it is important, just to be absolutely clear here, that some of the fears that were expressed throughout the week just don’t jibe with the facts,” he added.

Obama made his remarks to the media after a bilateral meeting with Mexican President Enrique Peña Nieto. Obama said he did not watch the convention in Cleveland, which wrapped up Thursday with Trump’s acceptance speech, but the president did read news coverage of the four-day Republican nominating event. He praised federal and municipal law enforcement agencies for maintaining public safety during the week.

Obama pointedly took issue with suggestions from some Republicans – in the wake of high-profile mass shootings at a gay nightclub in Orlando and of police officers in Baton Rouge and Dallas – that the United States was devolving into lawlessness and disorder. He said statistics show that the murder rate and violent crime rate are lower than they were during President Ronald Reagan’s tenure in the 1980s and than they were when Obama took office in 2009.

Obama also said that illegal immigration rates are far lower than in past years.

“The Republicans had an opportunity this week to share their vision with the country and emphasized those issues that they thought were important,” Obama said. “And I’m going to let the American people judge how persuasive their arguments were.”

The president also offered a reaction to the failed military coup in Turkey last week, saying he told Turkish President Recep Tayyip Erdogan “that we strongly reject any attempt to overthrow democracy in Turkey, that we support the democratically elected government there.”

He forcefully rejected rumors that the United States might have been aware of the plotting in advance: “Any reports that we had any previous knowledge of a coup attempt, that there was any U.S. involvement in it, that we were anything other than entirely supportive of Turkish democracy are completely false, unequivocally false.”

The president was also asked about Erdogan’s request that the United States extradited Fethullah Gulen, a Turkish minister living in Pennsylvania who is accused of helping organize the coup. He said he told Erdogan in a phone conversation to “present us with evidence” that Gulen was involved.

“But America’s governed by rules of law, and those are not ones that the president of the United States or anybody else can just set aside for the sake of expediency, even when we are deeply supportive of Turkish democracy and even when we care deeply about any attempts to overthrow their government or any other illegal actions,” Obama said.

He added that he hopes there is not an “overreaction” by Erdogan’s government to assail civil liberties in the wake of the coup. The government has arrested thousands of people who have been implicated in the plot, and fired tens of thousands more from their jobs, while restricting the overseas travel of Turkish academics.

There should not be “a weakening of the ability of legitimate opposition, or journalists through legal processes to voice their concerns, and to petition their government,” Obama said.

Peña Nieto visited the White House for a previously scheduled meeting with Obama that came less than 12 hours after Trump said that “no more” would the United States sacrifice its children “on the altar of open borders.”

In recent months, the Mexican president has firmly criticized Trump, the Republican presidential nominee, for his rhetoric on illegal immigration. But Peña Nieto declined to take sides Friday, saying that although the Mexican government is closely watching the U.S. election, it will leave the decision to the American public.

He pledged to work with “whomever is selected in November as the leader of this great nation. … And for right now, I propose going into a frank, open dialogue with whomever is elected on the relationship between our two nations.”

Obama and Peña Nieto, who met in Canada last month as part of a trilateral North American Leaders’ Summit, were to discuss trade and climate change. But their visit comes against the backdrop of Trump’s GOP convention speech in which he reiterated his intention to erect a massive wall on the U.S.-Mexico border and blamed undocumented immigrants for a wave of violence that had claimed American citizens’ lives.

“They are being released by the tens of thousands into our communities with no regard for the impact on public safety or resources,” the New York real estate magnate said, adding later, “We are going to build a great border wall to stop illegal immigration, to stop the gangs and the violence, and to stop the drugs from pouring into our communities.”

GOP convention attendees reacted with enthusiasm to his speech, chanting at one point “Build the wall!” and “Send them home!” at another.

During the news conference with Peña Nieto, Obama made a point of highlighting how cooperation between the two countries had helped curb illegal immigration and North America’s illicit drug trade.

“I want everybody to be very clear, Mexico has been a consistent, strong partner with us on these issues. And if they had not been, we would have had much bigger problems on our borders and the benefit of a cooperative Mexico,” the president said. “And by the way, a Mexico that has a healthy economy, a Mexico that can help us build stability and security in Central America, that’s going to do a lot more to solve any migration crisis or drug trafficking problem than a wall.”

Peña Nieto said the two countries had just established a high-level task force to combat the flow of heroin into the United States, to coordinate on initiatives such as eradicating poppy production in Mexico and curtailing the criminal groups and violence associated with the drug trade.

“It shows us the need of working together,” he said. “It also shows the need both countries have to face up to problems that are common problems.”