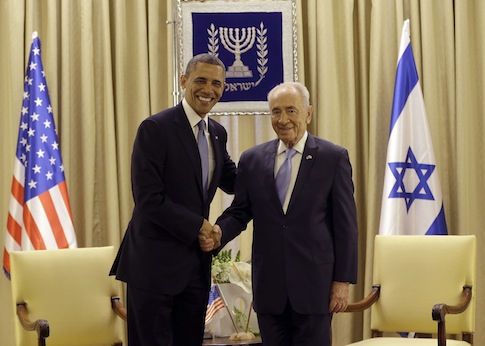 President Barak Obama called former Israeli president Shimon Peres over the weekend to wish him well after the latter suffered a mild heart attack on January 14.

Obama voiced his appreciation to the elder statesmen for his friendship over the years, a statement from Peres’s office said.

“I was lucky to be treated by a dedicated medical team that worked around the clock, not only to open and improve my artery but to improve my heart,” Peres told the US leader. “I left hospital stronger than I entered.”

Peres praised Obama’s use of diplomacy to tackle international crises. “Diplomacy is always the preferred route over war and violence and you proved that through diplomacy you can reach one-of-a-kind agreements,” he said. “Your immeasurable contribution to citizens of the world will live for many years.”

Peres also thanked Obama for fighting to address climate change and for championing the cause of science during his tenure as president.

The former president and prime minister was released from a hospital Tuesday morning, five days after being admitted for a heart issue. “I feel rejuvenated and I am ready to return to serving our wonderful country that I love so much,” he said.

Meanwhile, Peres had an ambulance called up to his home tonight after not feeling well, just several weeks after suffering the heart attack.

The 92-year-old president has been hospitalized at Sheba Hospital in Tel Hashomer after initially being treated at home. He was hospitalized after a slight irregularity in his heartbeat was picked up. His condition is stable and he is conscious.