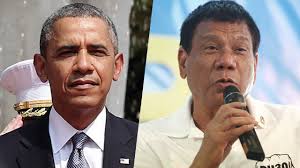 After being called an obscenity by the president of the Philippines, President Barack Obama canceled a meeting with the leader, Rodrigo Duterte, scheduled for Tuesday.

Duterte had threatened to curse out the U.S. commander in chief if Obama raised the issue of extrajudicial killings by Philippine authorities in a sweeping crackdown on drug trafficking. Speaking to reporters, Duterte, who took office in June, said the Philippines is a “sovereign state and we have long ceased to be a colony,” according to the Associated Press.

He added that: “I do not have any master except the Filipino people, nobody but nobody. You must be respectful. Do not just throw questions. ‘Putang ina’ I will swear at you in that forum.”

Asked to respond during a news conference after the Group of 20 Summit in China, Obama said earlier Monday that he had been told of Duterte’s comments, but the U.S. president shrugged it off as another in a line of “colorful statements” from Duterte.

“Clearly, he’s a colorful guy,” Obama said. The president added that he had asked his staff to speak with their Philippine counterparts to “make sure if I’m having a meeting, it’s productive and we’re getting something done.” Obama called the Philippines a close “friend and ally” of the United States.

Hours later, Ned Price, a spokesman for the National Security Council, said that the meeting with Duterte on Tuesday afternoon had been canceled and that Obama would instead meet with South Korean President Park Geun-hye.

More than 2,000 suspected drug dealers have been killed since Duterte took office, and Obama earlier said he would not shy away from the topic of “international norms” when it comes to due process rights when speaking with Duterte.

“We recognize the significant burden the drug trade plays in the Philippines and around the world,” Obama said. But “we will always assert the need to have due process and engage the fight against drugs in a way that is consistent with basic international norms. Undoubtedly, if and when we have a meeting, this is going to be something that’s brought up. My expectation, my hope, is that it could be dealt with constructively.”

Before the meeting was canceled, Obama suggested that the talk was predicated on whether Duterte was willing to have a serious conversation.

“I’m just going to make an assessment,” Obama said at the time. A few hours later, he canceled the meeting.