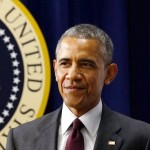 President Barack Obama came the closest yet to opposing capital punishment during an interview with The Marshall Project.

When asked if he is opposed to the death penalty, Obama said his “heartfelt” position is that it is justified “in theory, but in practice it is deeply troubling.”

The president said blacks are disproportionately sentenced to death, that bringing people to execution is costly and time-consuming, and most of all, people on death row have been found to be innocent. Obama said he will issue more pardons and clemencies as his presidency ends. Read more at The Marshall Project.