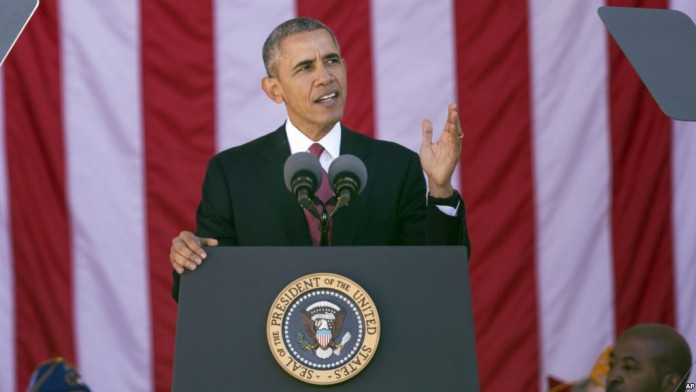 President Obama’s remarks at Arlington National Cemetery on Monday focused on the three American service members who were killed fighting the Islamic State militant group in Iraq. This time, Obama left no doubt that the missions that took their lives involved combat.

When U.S. ground troops returned to Iraq in 2014, Obama said their focus would be advising Iraqi forces rather than taking a direct part in fighting. But as the size of the force has grown to nearly 5,000, the U.S. troops are playing a more active role on the ground, providing supporting artillery fire to Iraqi troops and, in some cases, taking part in counterterrorism raids. The vast majority of ground combat is still conducted by Iraqi forces.

“In Iraq, three Americans have given their lives in combat on our behalf, and today I ask you to remember their stories as well,” Obama said on Memorial Day.

He described Navy SEAL Charles Keating IV as an “adventurer who surfed and spearfished and planned to sail around the world.” Keating died near Mosul last month when the base where he was advising Kurdish forces was attacked. “Please tell everyone Chuck saved a lot of lives today,” one of Keating’s colleagues wrote to his family shortly after the attack, Obama said.

Staff Sgt. Louis F. Cardin was killed in March when his outpost was struck by rocket fire. Cardin, the sixth of seven children, graduated from high school on a Friday and “three days later, the Marines came to pick him up,” Obama said.

“Louis gave his life protecting the Marines under his command,” the president said.

Army Master Sgt. Joshua L. Wheeler had deployed to Iraq and Afghanistan 14 times and had been awarded 11 Bronze Stars, Obama said. He died in October helping to free hundreds of Islamic State captives who were awaiting execution.

“We were already dead and then God sent us a force from the sky,” one of those prisoners said.

Obama described sending U.S. forces to war as his most “solemn obligation” as commander in chief, and he encouraged Americans to listen when veterans and military families talk about those killed in combat.

“Hear from those who loved them about what their smile looked like and their laugh sounded like and the dreams that they had for their lives,” Obama said.

He called on Americans to live better, more-selfless lives, inspired by the sacrifices of fallen service members.

“For us the living, those of us who have a voice, it is our responsibility, our obligation, to fill that silence with our support and gratitude, not just with words but actions,” he said.

Obama also spoke directly to the children of Iraq and Afghanistan veterans, many of whom were wearing red T-shirts to honor their fallen parents and were in the crowd to hear the president speak.

“Your moms and dads would be so proud of you,” Obama told them, “and we are, too.”