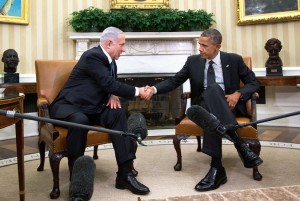 [Video below.] President Barack Obama and Israeli Prime Minister Bibi Netanyahu took a step toward fixing their fractured relationship on Monday during their first face to face meeting in over a year.

Obama said the two leaders are “looking to find common ground” as they prepare to discuss a wide range of issues including the rise of ISIS, continued tension between Israel and Palestine and the Iran nuclear deal. President Obama and his surrogates have defended the deal as the best way to help stymie Iran’s nuclear program.

“It’s no secret that the prime minister and I have had a strong disagreement on this narrow issue,” Obama said of the U.S.-supported nuclear deal with Iran and six world powers aimed at curbing Tehran’s nuclear program. Obama added that the two leaders share a desire to prevent Iran from developing nuclear weapons.

Netanyahu has stridently criticized the deal as a move that threatens safety on a global scale.

“We think this is not only a threat to us. We think this is a threat to you as well,” Netanyahu told NBC News, a day after the nations reached the historic agreement earlier this year. “Iran has killed more Americans than anyone other than al Qaeda.”

On Monday, Netanyahu was publicly reserved in criticism saying ” We have not given up hope for peace.”

Monday’s meeting will also be clouded by the controversy following Netanyahu’s appointment of a new spokesman who has spoken derisively about Obama. Ran Baratz, a conservative commentator, has suggested in Facebook posts that Obama is anti-Semitic and Secretary of State John Kerry cannot be taken seriously.

Even with the low expectations, the fact that Obama and Netanyahu are meeting at all is seen as an important step. While the two leaders have long had a chilly relationship, tensions boiled over earlier this year amid Obama’s pursuit of the Iranian nuclear deal.