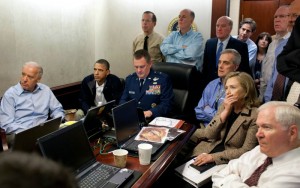 An extensive New York Times report on the secret legal deliberations behind the 2011 raid that killed Osama bin Laden reveals that President Obama ordered the operation to be kill-only.

Weeks before the mission, four administration lawyers discussed the legal ramifications of either killing or capturing the fugitive terrorist leader.

Ultimately, they decided, it would be legal to execute bin Laden on the spot. The president agreed, apparently, as the Times reports that Obama “explicitly ordered a kill mission.” Read more at The New York Times.

Leave a Reply to One Nation Cancel reply