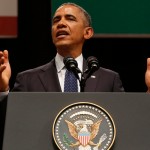 In an interview broadcast on May 15, President Obama told Al-Arabiya: “I am a deep and strong supporter of Israel, and the connection between the United States and Israel is obviously powerful. And Israel has legitimate security concerns. There’s no doubt about it. And what is also true is I’m deeply committed to a Palestinian state.”

“The only solution to me over the long term is a two-state solution. And we worked very hard, but, frankly, the politics inside of Israel and the politics among the Palestinians, as well, made it very difficult for each side to trust each other enough to make that leap.”

“And what I think at this point, realistically, we can do is to try to rebuild trust – not through a big, overarching deal, which I don’t think is probably possible in the next year, given the makeup of the Netanyahu government, given the challenges I think that exist for President Abbas – but if we can start building some trust around, for example, relieving the humanitarian suffering inside of Gaza…then I continue to believe that the logic of a two-state solution will reassert itself.”

“I’ve said to the Israelis you cannot remain a state that is both a democracy and Jewish if you continue to have this problem unresolved. And with respect to the Palestinians, I’ve said that you cannot expect to have a state of your own and the full dignity and respect that is inherent for all human beings if you also don’t recognize Israel, because Israel is not going anywhere.”