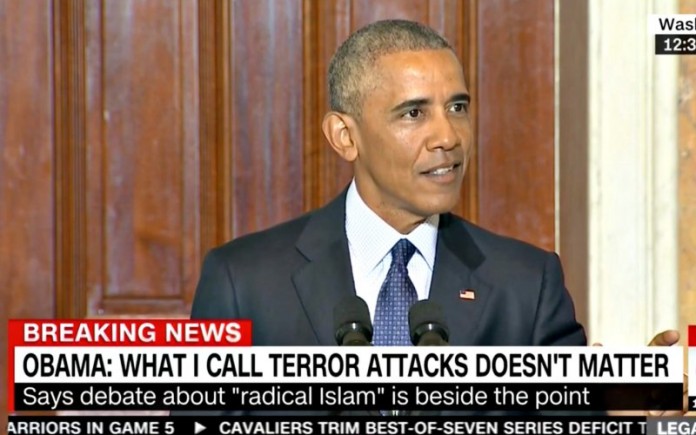 At the end of his prepared remarks this afternoon, President Obama went off the cuff and spoke frankly about the attacks on his administration for refusing to use the words “radical Islam” when describing ISIS and potentially related terror attacks.

He said: “The main contribution of some of my friends on the other side of the aisle have made in the fight against ISIL is to criticize this administration and me for not using the phrase ‘radical Islam.’ That’s the key, they tell us. We can’t beat ISIL unless we call them radical Islamists,” he relayed, using the alternate acronym for the terror group.”

He added: “What exactly would using this label accomplish? What exactly would it change? Would it make ISIL less committed to trying to kill Americans? Would it bring in more allies? Is there a military strategy that is served by this? The answer is none of the above. Calling a threat by a different name does not make it go away. This is a political distraction… If there’s anyone out there who thinks we’re confused about who our enemies are, that would come as a surprise to the thousands of terrorists who we’ve taken off the battlefield.”