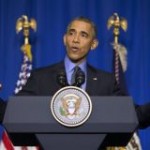 At a news conference in Paris on Tuesday, President Obama said “the most elegant way” to reduce carbon emissions is “to put a price on it.”

He was responding to a reporter who asked Obama, “I wonder if you see any political path back home toward putting a price on carbon?”

“I have long believed that the most elegant way to drive innovation and to reduce carbon emissions is to put a price on it. This is a classic market failure,” Obama replied.

“If you open up an Econ 101 textbook, it will say the market’s very good about determining prices and allocating capital towards its most productive use, except there’s certain externalities, there’s certain things that the market just doesn’t count, it doesn’t price, at least not on its own. Clean air is an example; clean water — or the converse, dirty water, dirty air.

“In this case, the carbons that are being sent up that, ah — originally we didn’t have the science to fully understand, we do now. And if that’s the case, if you put a price on it, then the entire market would respond.

“And the best investments and the smartest technologies will begin scrubbing, effectively, our entire economy.

“You go down to Miami, and when it’s flooding at high tide on a sunny day and fish are swimming through the middle of the streets, you know, there’s a cost to that. And insurance companies are beginning to realize that in terms of how they price risk.

“And the more the market on its own starts putting a price on it, because of risk — it may be that the politics around setting up a cap and trade system, for example, shifts as well.”