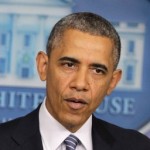 President Barack Obama said the curbs on carbon emissions to combat climate change that his administration plans to unveil next week will also help address a growing threat to the nation’s health.

“We don’t have to choose between the health of our economy and the health of our children,” he said in his weekly address, which was recorded yesterday at Children’s National Medical Center in Washington. “As president, and as a parent, I refuse to condemn our children to a planet that’s beyond fixing.”

The Environmental Protection Agency is scheduled to announce a plan to limit carbon emissions from U.S. power plants on June 2. The two-tired regulation will seek reductions in greenhouse gases of as much as 25 percent over 15 years, according to people familiar with the proposal.

Obama’s address is part of an attempt by the White House to frame the coming debate over the new rules in personal terms, casting climate change as an issue that directly impacts Americans’ daily lives.

The costs of climate change, Obama said, “can be measured in lost lives and livelihoods, lost homes and businesses; and higher prices for food, insurance, and rebuilding.”