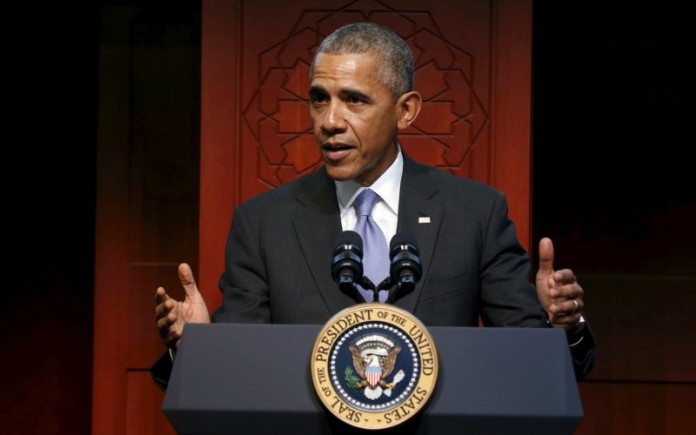 Dr. Zuhdi Jasser, a prominent Muslim leader, stated: “As an American Muslim I’m just insulted. It’s disgraceful that this is the mosque-that Obama’s picked to be the first visit. The Islamic Society of Baltimore, first of all if you go to their website it’s like a covert operation. There’s no name on it. It basically has pictures of individuals but no names. They had an imam, Mohammed Al-Sheikh, who was there from ’83 to ’89 and then another 10 years, came out of the [terrorist] Muslim Brotherhood in Sudan. Has had online imam sermons in which he basically excused Palestinian suicide bombing. He then went in to fill in, he was the guy who took over the Dar Al-Hijrah mosque in Northern Virginia after Awlaki left, and I”ll remind you Awlaki is the imam that declared war on the United States, radicalized Nidal Hasan and so many other Americans against our country. So this mosque is very concerning. The imam Yaseen Shaikh in 2013 has a youtube sermon from just two years ago calling homosexuals basically psychological deviants, a disorder, and basically espousing a very extreme opinions about homosexuality, which I would think is at divergence from the president’s position on that.” [Fox News, Fox &Friends Sunday, 1/31/16]

It is disgraceful and frightening that President Obama chose to speak at a mosque with multiple terror ties, the Islamic Society of Baltimore (ISB), yesterday (Wednesday February 3). President Obama’s selection of this mosque underscores the absurdity of the President’s unnecessary campaign to “defend Muslims” – despite the fact that anti-Muslim hate crimes are rare here (only 25% of the hate crimes that occur against Jews), while the President downplays and virtually ignores the scourge of Islamist terrorism that endangers all Americans.

According to investigative reporters (see here and here and here) and additional sources, ISB’s terrorist ties include the following:

* ISB is a member of the network of mosques controlled by the Islamic Society of North America (ISNA). Declassified FBI memos revealed ISNA to be a terrorist Muslim Brotherhood front group. ISNA was also a named un-indicted co-conspirator in the 2008 Holy Land Foundation terror case, and evidence in that case showed that ISNA was involved in funneling money to the terrorist group Hamas. The Investigative Project on Terrorism revealed that ISNA’s annual conferences distribute blatantly anti-Israel, anti-gay and anti-American literature, including books and pamphlets “portray[ing] U.S. prosecution of terrorists and terror supporters as anti-Muslim bigotry; dramatic revisionist history that denied attacks by Arab nations and Palestinian terrorists against Israel; and anti-Semitic tracts and hyperbolic rants about a genocide and holocaust of Palestinians.”

* Radical Imam Mohammed Adam el-Sheikh served as ISB’s Imam for 15 years (1983-1989 and 1994-2003). El-Sheikh was also a leading member of the Muslim Brotherhood network, and was a regional director for the Islamic American Relief Agency, a subsidiary of the Islamic African Relief Agency (IARA). The U.S. Treasury designated IARA as a terrorist organization in 2004, and explained that IARA participated in meetings to find safe havens for Osama bin Laden; helped raise $5 million in 2000 for IARA’s affiliate Maktab Al-Khidamat (MK) (an organization co-founded by Osama bin Laden); and “was responsible for moving funds to the Palestinian territories for use in terrorist activities, notably serving as a conduit to Hamas in one Western European country.” After leaving ISB in 2003, El-Sheikh moved to the notorious Muslim-Brotherhood-controlled Dar al-Hijrah Islamic Center in Falls Church, Virginia (where he replaced Al-Awlaki) and justified suicide bombings by Palestinians against Israelis.

* ISB resident scholar, Imam Yaseen Shaikh condemned “progressive Muslims” and blasted homosexuality as “something which we despise,” “immoral” and “disgusting,” and said we have to stop accepting them, and that homosexuality has no place in Islam or society, and that the Quran says “harm them” to those who engage in homosexuality, in his lengthy 2013 youtube video. Shaikh also said that whatever the Quran commands, we must submit to it.

* Israr Ahmed was a “celebrity guest speaker” at ISB. Ahmed had ties to Pakistani Islamic jihadist groups, Tanzeem-e-Islami (which seeks to establish a global caliphate, is anti-modernity and wants Sharia to control all spheres of life) and Jamaat-e-Islami (which Ahmed withdrew from when Jamaat-e-Islami chose to engage in “electoral activities,” which was contrary to Ahmed’s belief that a revolution should bring about a caliphate.) Asia Times reported that Ahmed spoke at a 1995 ISNA convention, saying: “A final showdown between the Muslim world and the non-Muslim world, which has been captured by the Jews, would soon take place. The Gulf War was just a rehearsal for the coming conflict.” The report also explained that Ahmed “appealed to the Muslims of the world, including those in the US, to prepare themselves for the coming conflict.”

* Two ISB officials, ISB President Muhammad Jameel and ISB general secretary Abid Husain, joined the Council on American-Islamic Relations (CAIR, an un-indicted co-conspirator in the Holy Land Foundation Hamas funding trial) at a news conference in August 2014, where ISB’s officials condemned and spewed numerous falsehoods about Israel’s defensive operation in Gaza to stop Hamas’s incessant firing of thousands of rockets at Israeli civilians. The ISB officials never mentioned the Hamas rockets targeting Israeli civilians. Instead, ISB Pres. Jameel falsely accused Israel of guiding precision missiles to kill civilians, “genocide in the name of self defense,” “immunity to violate human rights,” and doing all this to “depopulate and uproot the people of Gaza to make way for more settlements,” and condemned the U.S. for “reject[ing] the right of resistance of an occupied people under siege.” Similarly, ISB officer Husain falsely accused Israel of “indiscriminate assault and unjust use of force” and “unrestrained aerial bombardment of civilian populations.”

In fact, then-chairman of the U.S. Joint Chief of Staff Martin Dempsey confirmed that Israel “went to extraordinary lengths” to minimize civilian casualties and “acted responsibly” during the operation to destroy Hamas rockets and tunnels. Israel made hundreds of thousands of calls to Gazans’ cell phones and dropped hundreds of thousands of leaflets warning Gazan civilians to leave areas that Israel needed to target to destroy Hamas rocket arsenals. General Dempsey even sent an American team to Israel to learn how to avoid civilian casualties from Israel’s military.

It’s absolutely horrifying that President Obama would choose a radical terrorist supporting Mosque similar to the one the San Bernardino Muslim killers attended. This does the opposite of sending a message against radical terrorist Islam. It promotes and legitimizes radical murderous Islam. This gives more credence to the painful and frightening belief that Obama has sympathy for and is an apologist for radical Islam. After all, Obama has released terrorists from Guantanamo, won’t use the term radical Islamic terrorism, wouldn’t attend the anti radical Islam rally in Paris, has invited Muslim Brotherhood members to the White House, embraced the radical Morsi government in Egypt, fought against sanctions on Iran, ignored Iran violations and ended sanctions on Iran, stated Hezbollah and Hamas have “legitimate claims,” said ISIS is a JV team, allows only a fraction of anti-ISIS bombing raids the armed forces recommends, and has sent radical Muslims to represent the US in Europe, etc.

Where is the media? Where is Congress? Where are our American Jewish and Christian and moderate Muslim leaders? Where are our presidential candidates? We dare not be silent again!

Morton A. Klein is the national president of the The Zionist Organization of America (ZOA).