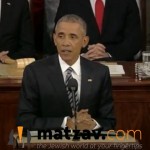 President Obama took thinly veiled shots at Republican presidential candidate Donald Trump’s extreme rhetoric and plan to keep Muslims out of America during his State of the Union on Tuesday.

In the speech, the president called for America to “reject any politics that targets people because of race or religion” to a boisterous standing ovation from lawmakers in both parties.

“This is not a matter of political correctness,” he claimed. “It’s a matter of understanding just what it is that makes us strong.

“When politicians insult Muslims, whether abroad or our fellow citizens, when a mosque is vandalized, or a kid is called names, that doesn’t make us safer,” Obama added. “That’s not telling it like it is. It’s just wrong.

“As frustration grows, there will be voices urging us to fall back into our respective tribes, to scapegoat fellow citizens who don’t look like us, or pray like us, or vote like we do or share the same background. We can’t afford to go down that path.”

The comments come as a rebuke to Trump, the billionaire who has stuck to the top of Republican presidential polls. The GOP front-runner called for the U.S. to bar Muslims from entering the country until officials can “figure out what is going on.”