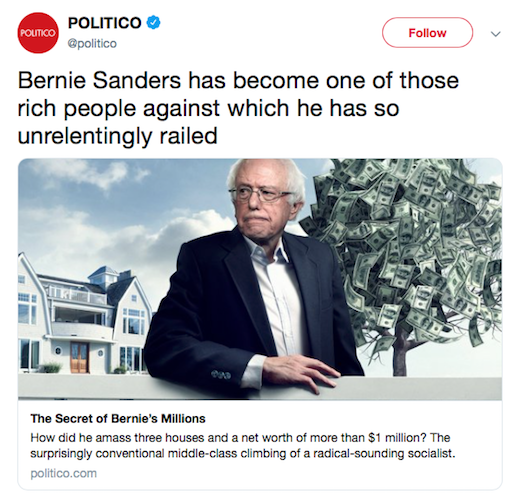 Democratic New York Rep. Alexandria Ocasio-Cortez accused Politico of anti-Semitism on Saturday over an illustration that ran alongside an article that was published about Independent Vermont Sen. Bernie Sanders’ finances.

The article, “The Secret of Bernie’s Millions,” was an investigation into how the self-proclaimed democratic socialist amassed significant wealth and properties despite “unrelentingly” railing on the wealthy. One of the illustrations to go along with the article includes Sanders, who is Jewish, looking off into the distance with a mansion over one shoulder and a tree with dollar bills as leaves. Another one shows him holding a house in his hands with two more houses appearing on each shoulder. The three houses represent his three properties.

“Can ⁦@politico⁩ explain to us how photoshopping money trees next to the only Jewish candidate for president and talking about how “cheap” and rich he is *isn’t* antisemitic?” Ocasio-Cortez tweeted. “Or are they just letting this happen because he’s a progressive politician they don’t like?”

Ocasio-Cortez continued to tweet, this time attacking those who criticized Ilhan Omar’s inflammatory comments yet ignored this article.

“Notice the people willing to explain this away, yet when Ilhan’s words are taken out of context, they are the 1st to jump on her. Look at how these accusations are selectively enforced on the left, esp when it’s the *alt-right* actually committing antisemitic violence in the US.”