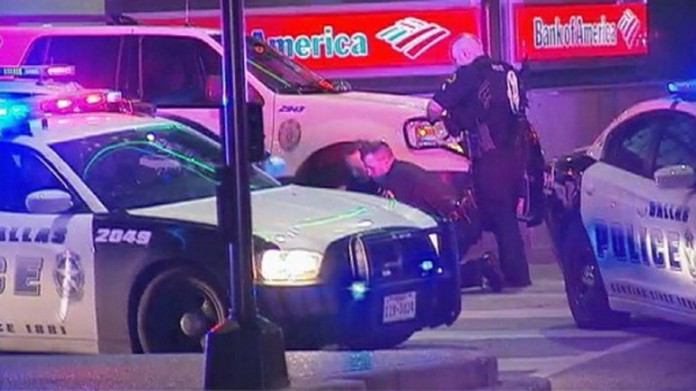 Four Dallas police officers have been shot dead at a Black Lives Matter protest in downtown Dallas. One person is reportedly in custody but police continue to look for another suspect who might have been involved. Police have not officially confirmed any of the news reports.

At least eight other officers were injured.

The condition of the officers and the circumstances of the shooting are unknown at this time.

The Dallas Morning News reported the shots were fired at near the intersection of Market and Main streets, which is near the John F. Kennedy Memorial Plaza.

These shots came at around 9 p.m., local time just as a rally where hundreds gathered to protest the recent fatal police shootings of Alton Sterling in Baton Rouge, Louisiana, and Philando Castile in Minnesota was ending, KXAS reported. The protesters were marching from the Belo Garden Park to the Old Red Courthouse. Video showed scenes of people fleeing through the streets as they heard shots.

It is unknown at this time if there is a connection between the shots and the protest.

A video that appears to capture audio of shooting appeared on YouTube and Twitter. In the video, what sounds like several bursts of gunfire can be heard.

“Everyone just started running,” protester Devante Odom told the newspaper. “We lost touch with two of our friends just trying to get out of there.”

Renee Sifflet, a mother of three teenagers who attended the rally and march, said she lost track of one of her children during the ensuing chaos.

“I brought them here for a positive experience, something they could say they were part of when they’re older, ” she said. “Then it turned negative.”