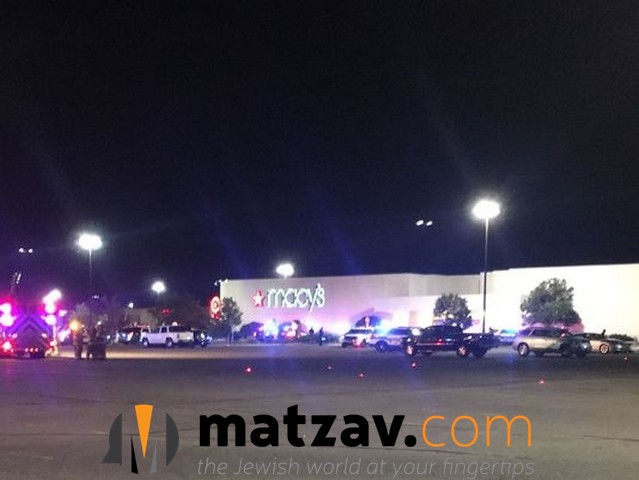 Authorities are investigating the stabbings of nine people inside a Minnesota mall Saturday night as a potential act of terrorism after an ISIS-linked news agency claimed that the armed attacker was “a soldier of the Islamic State.”

The attack occurred around 8 p.m. inside the Crossroads Mall in St. Cloud, Minnesota, about 70 miles northwest of Minneapolis. It ended inside a Macy’s store where an off-duty police officer shot and killed the suspect.

St. Cloud Mayor David Kleis said the suspect, whom officials are not naming at this time, lunged at Jason Falconer, a part-time police officer in Avon, Minnesota, west of St. Cloud. Falconer then fired shots at the suspect, who fell but got up three times before he died.

“He clearly prevented additional injuries and potential loss of life,” Kleis said during a news conference Sunday afternoon. “His heroic actions are exemplary.”

Falconer, who was off-duty and happened to be at the mall Saturday night, is also a former chief of police in Albany, Minnesota.

The suspect, who was wearing a private security uniform, made at least one reference to Allah during the attack and asked at least one person whether they were Muslim before attacking them, according to the St. Cloud Police Department.

In a statement Sunday, Amaq News Agency said the suspect “carried out the operation in response to calls to target citizens of countries belonging to the crusader coalition.”

Richard Thornton, FBI special agent in Minneapolis, said during the news conference that the attacks are being investigated as a “potential” act of terrorism, but the suspect’s motive remains unknown.

Officials said there’s no indication at this time that the suspect had direct communications with the Islamic State, or that the terrorist group had planned the attack or knew of it beforehand.

“IS has encouraged lone wolf attacks. It has also claimed past attacks that are not believed to have been planned by its central leadership,” according to a news release from the police department.

All of the victims, whose ages range from 15 to 53, suffered non-life-threatening injuries. Three remain hospitalized, authorities said.

Officials did not release any information about the attacker. They also did not comment further on the claim by the Amaq Agency.

“There’s nothing that we have gleaned that would suggest to us that this is anything other than what it appears to be now,” Anderson told reporters Sunday. “At this time, there’s nothing to suggest anything differently than what you’ve been told. There are a lot of moving parts.”

Sydney Weires was at the mall during the incident. She told the St. Cloud Times that she and her friends were walking down a hallway toward Sears when they heard a loud scream.

“He was screaming at us, ‘get the F out!'” she said about one of the men, according to the paper.

Weires and her friends were able to leave the mall before authorities enforced a lockdown.

Another witness, Harley Exsted, said he and his wife were in St. Cloud on Saturday to watch their son play in a college golf tournament, according to the St. Cloud Times.

“But then when we heard the screaming, then we knew it was time to go,” he added.

Authorities have not released the name of the off-duty officer who’s from another jurisdiction.

The suspect has had encounters with police before, Anderson told reporters, but most were for minor traffic violations.

Hours after the incident, groups of shoppers huddled inside the mall’s food court. They have since been released, Sgt. Jason Burke, spokesman for the police department, said, though the mall will remain closed Sunday as the investigation continues.

Many of the attacks that the Islamic State has claimed since the highly coordinated shootings and bombings in Paris last November were carried out by individuals who were simply inspired by the group’s ideology and likely never came into direct contact with ISIS operatives, The Washington Post’s Max Bearak wrote in July.

The attack happened on the same night that an explosion happened in the Chelsea neighborhood of Manhattan in New York City. At least 29 people suffered non-life-threatening injuries in the blast. One person was seriously injured, authorities said.

Hours earlier, a pipe bomb exploded in a Jersey Shore garbage can shortly before a scheduled charity race benefiting Marines and Navy sailors.

On Friday, in Philadelphia, a gunman fired 18 shots at a police officer before shooting several others, including a woman who was killed.

Authorities say none of the incidents appear to be related.

Democratic presidential nominee Hillary Clinton said she was briefed on the stabbing, as well as on the explosions in New York and New Jersey, according to CBS affiliate WCCO. Donald Trump has not made a comment on the Minnesota incident.