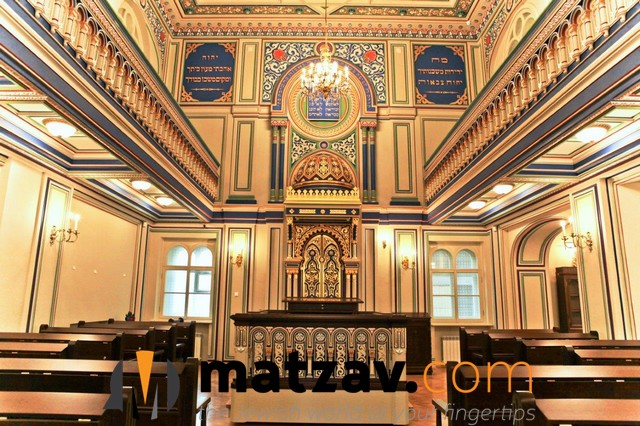 After an extensive reconstruction, and at a cost of over a million dollars, the St. Petersburg, Russian Jewish community re-opened its 130 year old magnificent Small Synagogue. The five years of restoration work was presided over by hundreds of community members including young professionals and businessmen. Architects and leading Russian experts in the field of reconstruction and historic building preservation were also present. The financing for Mrs. Lily Safra provided the renovation and reconstruction in memory of her husband — the late philanthropist Edmond Safra. During his lifetime, Mr. Safra had a warm spot for the St. Petersburg Jewish community, and assisted in the development and maintenance of Jewish life in the city. The Small Synagogue is on the premises of the Grand Choral Edmond J. Safra Synagogue, which was also renovated, with the help of the Mrs. Lily Safra.

Since it was founded in 1886 until five years ago, the building served the St. Petersburg Jewish community. The Small Synagogue operated all these years despite interference from the authorities which during certain periods repressed religious life in Russia. The building was erected at a time when St. Petersburg was outside the Pale of Settlement and Jews were forbidden to live there besides a small number who were vital to the city’s economy. When the synagogue’s construction was completed, it was referred to by all as the “merchant’s synagogue” and since then has served the Jewish community. Even during the more difficult times of the Jewish community in Russia, such as during Communist rule and the German siege on the city, the Small Synagogue operated continuously and there were times when it even served as the city’s chassidic synagogue.

This special building comes with an impressive history, and its walls bear the secrets of how Judaism was kept alive during times of tribulation.

During the years of the synagogue’s existence, great Torah leaders such as the world famous Rogachover Rav, chassidim and many other renowned personages prayed there and took part in its activities. During the German siege on the city, which killed over one million of its residents, Jews were also among the fallen, and every day hundreds of Jewish corpses were brought to the synagogue’s courtyard and from there brought to a Jewish burial.

During the communist regime, a Jewish underground organized Torah and Hebrew language studies in it. Emissaries of the Lubavitcher Rebbe came to the city in the 1970’s and 1980’s and gathered together those who were thirsty for Judaism, and needed teachers and instructors to teach them. These activities took place underground in private homes and in the synagogue.

During the soviet years, the synagogue members tried to maintain the interior of the synagogue but without proper funds and possibilities it was slowly deteriorating/

In 1993 the Safra family contributed to the renovation of the Small Synagogue building in memory of Mrs. Safra’s son Chizkiyahu Claudio Hakohen, and his son Raphael, who died in a car accident.

Then again in 2011 it was decided to completely reconstruct and renovate the building. Once, the renovation began, exquisite architectural treasures were revealed! When many layers of bronze paint were removed from the aron kodesh it was discovered that the original paint was of pure gold! The black painted wood was stripped and beautiful red wood was revealed. Under layers of boards in the women’s gallery the restorers found velvet upholstery, And under thick heavy paint on the ceiling and moldings, a beautiful intricate design was exposed. The bima which all the years was thought to be made of wood was stripped and lo and behold it was actually made of ironworks! In addition, many old books and artifacts were discovered in the attic and hidden corners.

Back to the present:
The inauguration ceremony was held in the Small Synagogue among much pomp and excitement. Participants included the chief rabbi, Rabbi Menachem Mendel Pevzner; the chairman of the Jewish Community, Mr. Mark Gruberg; Jewish community leaders; St. Petersburg’s mayor Mr. Georgy Poltavchenko; chairman of the local legislature, Mr. Vyacheslav Makarov; Israel’s Consul General Michael Lotem; diplomats from the US, Germany, Hungary, Czech Republic and other countries; and leaders and members of the Jewish community who came in masses. At the end of the unveiling of the names of the donors who restored the magnificent structure, the Small Synagogue’s caretaker conducted a tour of the synagogue.

The climax of the event was the affixing of the mezuzahs on the doorposts by chief rabbi Rabbi Menachem Mendel Pevzner and cantor Gregory Yakerson’s beautiful rendition of the blessing Shehechiyanu.

Mayor Poltavchenko congratulated the members of the Jewish community on this day of celebration and expressed his admiration for the work done by Jewish community members to establish and develop the city throughout its history. The St. Petersburg chief rabbi dedicated his words to past worshipers of the synagogue, to those who gave their lives to observe Judaism in St. Petersburg down the ages, and to the current synagogue worshipers.

Friends of the Jewish community around the world, including Michael Mirilshvili, sent their blessings to the synagogue on the occasion of its reinauguration, which was an indication of flourishing Jewish life in Russia and St. Petersburg. For chassidic families, such as Ruskin, Rozov, Shapiro, Motzkin, Medalia, Romanov, Kogan, Scheinin, Lieberman, and Lazarov — this is a real day of celebration! It is a day to commemorate the memory of their grandparents and grandmothers, many of whom were rabbis and rebbetzins, as well as activists and chassidim who gave up their lives to maintain the spark of Judaism. It is a true day of victory for maintaining chassidic life in St. Petersburg. 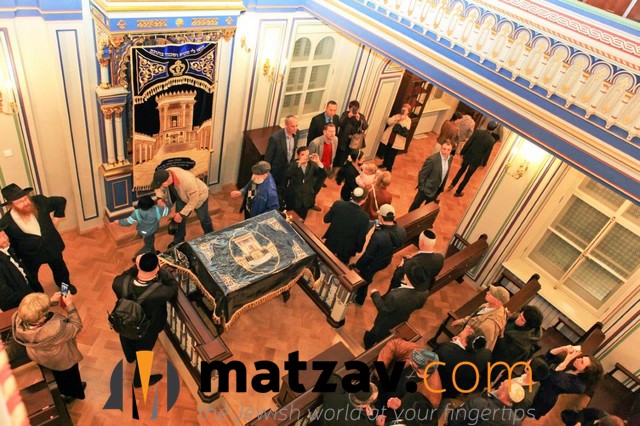 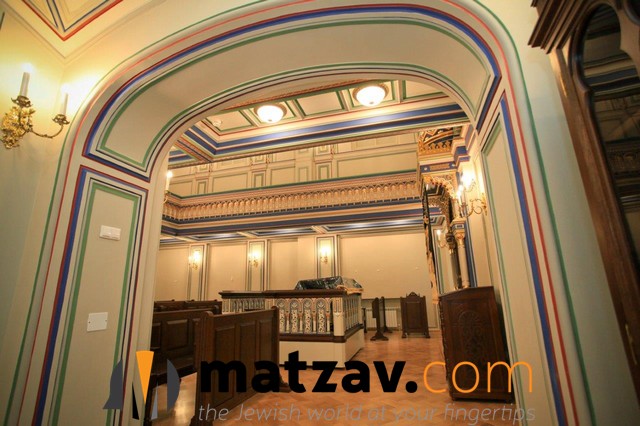 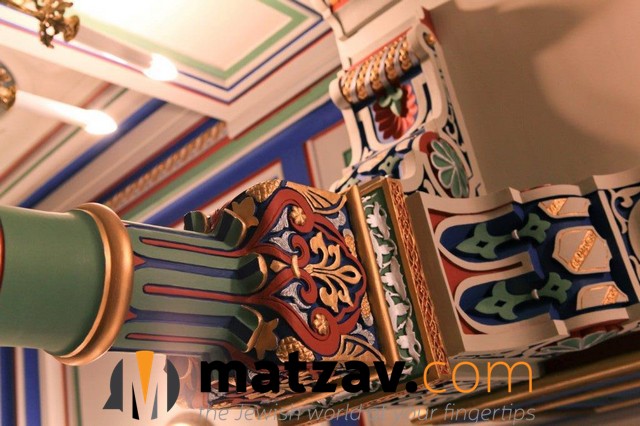 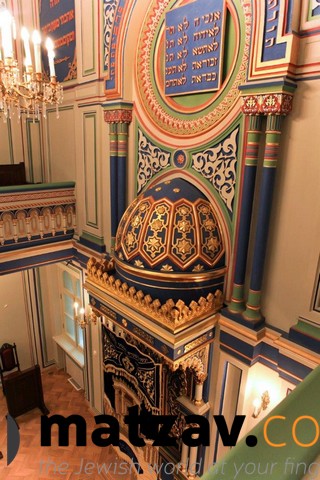 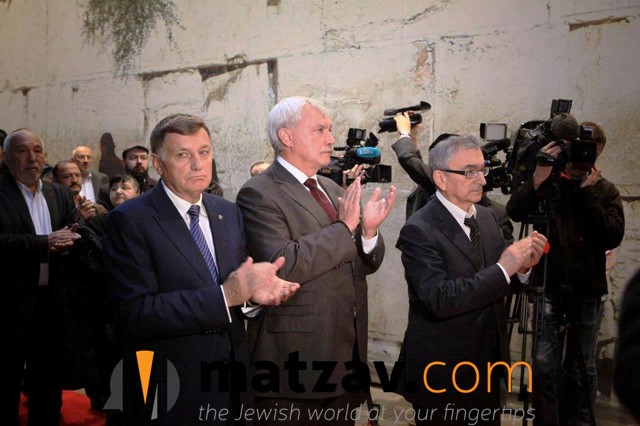 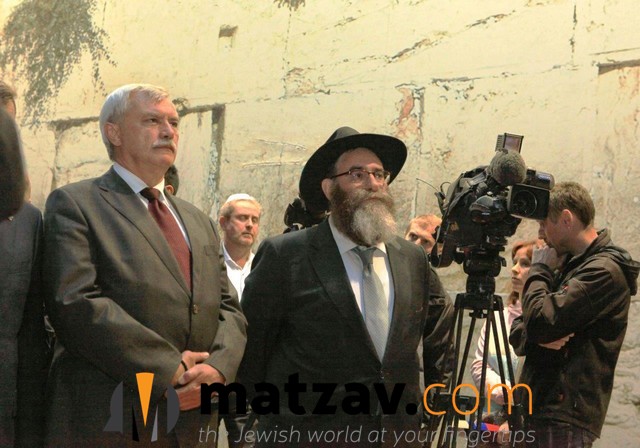