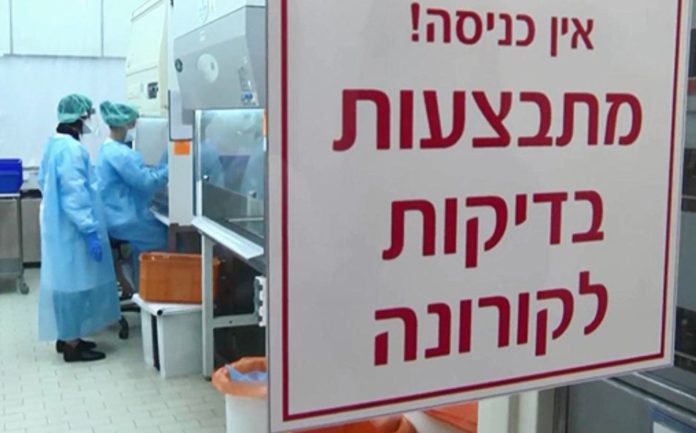 As of Sunday morning, the third day of neighborhood closures in some cities, the number of new cases was doubling at a rate of once every 18 days, compared to 16 days at the end of last week.

A total of 132 corona patients were in serious condition as of Sunday, when the number of active cases stood at 18,940, and the death toll since the start of the first wave had reached 358. A total of 18,915 Israelis have recovered from the coronavirus.

There was also concern about possible rioting in Bnei Brak, where a large police contingent is employed and where a broad closure might soon be declared. Bnei Brak residents are also criticizing the authorities for failing to evacuate confirmed coronavirus cases fast enough to keep them from spreading the virus.

One Bnei Brak resident said, “People here are very careful about wearing masks and social distancing, but without the authorities and the Homefront Command, it will be difficult.”

The closures were announced for neighborhoods that are seeing particularly large numbers of new coronavirus cases. Many residents feel that they are being discriminated against by the authorities.

Lod resident Moshe Rahminov said, “There are cities like Rishon Lezion, Raanana, even Tel Aviv–did anyone close them down? No! They choose cities or neighborhoods with mixed populations or a mediocre or lower socioeconomic status and close them down. It’s easier,” he said.

However, one resident of Ramle said Friday, shortly before access to and from his neighborhood–as well as activities within its borders–came under restriction, that “everyone is at fault.”

“The average Israeli doesn’t care that he wasn’t following instructions. People didn’t do anything to prevent infection. The authorities tweeted that there was ‘enforcement,’ but no one was careful about anything, and even the government didn’t do a thing in the two months between the first wave and the second,” he said.

Over the weekend, the Health Ministry issued new regulations designed to reduce the number of Israelis ordered to self-quarantine.

According to the revised instructions, the time frame for epidemiological research into people who might have come into contact with a confirmed coronavirus carrier will only go back 4-10 days into the confirmed patient’s movements, rather than the previous 14 days.

When it comes to coronavirus patients who can pinpoint when their symptoms first appeared, epidemiological research will attempt to locate everyone with whom they came in contact in the four days prior to becoming symptomatic.

For patients who cannot identify when their symptoms first appeared, research will attempt to locate everyone with whom they came in contact in the 10 days prior to testing positive for the virus.

However, the period of quarantine itself will remain at 14 days, the ministry noted.

“Given the information collected thus far, which indicated that the time frame for infection is some 48 hours prior to the appearance of symptoms, when the symptoms are not specific to coronavirus and the exact time they appeared cannot be determined, a decision has been taken to shorten the epidemiological time period for COVID-19 patients,” said the outgoing head of the ministry’s Public Health Service, Professor Siegal Sadetzki.

Sadetzki explained that shortening the epidemiological time frame could exempt “many people” from mandatory quarantine.

The ministry also said that shortening the time frame for researching possible contacts could allow epidemiological researchers to focus on contacts at higher risk of testing positive for coronavirus.

Dan Lavie contributed to this report, which first appeared in Israel Hayom.