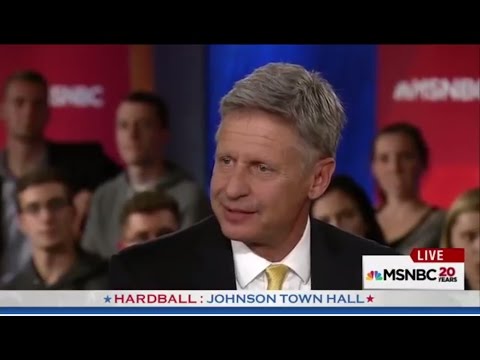 Gary Johnson, the Libertarian nominee for president, had been raring for Wednesday night’s “town hall” on MSNBC. He had been cut from the first televised debate after missing the polling threshold, and he had not been invited when the network hosted a “commander-in-chief forum” with Hillary Clinton and Donald Trump.

“This was their consolation prize,” Johnson told The Washington Post this week when asked about the MSNBC special. “It was put to us that, look, you weren’t in this initial program. Here’s what we’d like to offer in lieu of being with the two major party candidates. And I said: An hour of prime time Chris Matthews? I’ll take it.”

But the hour didn’t go as planned. Johnson, who had been pilloried for blanking on the relevance of the Syrian city of Aleppo in another MSNBC interview, whiffed his way through an even easier foreign policy question.

“Anywhere in the continents,” said Matthews. “Any country. Name one foreign leader that you look up to.”

“I’m talking about living, OK?” said Matthews. “You gotta do this. Any continent. Canada, Mexico?”

“I guess I’m having an Aleppo moment,” said Johnson.

“In the whole world!” said Matthews. “Anybody in the world.”

Weld, who had left the governor’s office in Massachusetts in an unsuccessful attempt to become ambassador to Mexico, began naming the country’s former presidents. “Fox? Zedillo? Calderon?”

“Fox,” said Johnson with a combination of jubilation and relief. “He was terrific.”

Johnson’s inability to remember the full name of Vicente Fox was a genuine surprise. Johnson governed New Mexico, which shares a small border with Mexico, from 1995 to 2003. Fox, a former Coca Cola executive, won Mexico’s 2000 presidential election with an unusual amount of fanfare, as his center-right National Action Party (PAN) broke generations of one-party rule by the center-left Institutional Revolutionary Party (PRI).

And in recent months, Fox had become a vigorous opponent of Donald Trump. He gave several interviews promising that Mexico would not “pay for that f—ing wall” if Trump won the presidency. He was filmed bashing a Trump-shaped pinata. He tweeted mockery at Trump when he managed to wind up on a Trump campaign fundraising email list.

Johnson had appeared to notice. Over the summer, as he rose in the polls, Johnson added Texas-based immigration reform advocate Juan Hernandez as an adviser on Latino issues. This past weekend, at the annual Texas Tribune Festival in Austin, Hernandez organized interviews between Johnson and several Spanish-language TV stations. The Washington Post was in the room as Hernandez talked Johnson through a Mexican television spot, where he offered to meet with Mexico’s President Enrico Pena Nieto to discuss immigration and trade. “As Vicente Fox says: Hoy, hoy, hoy!” said Johnson.