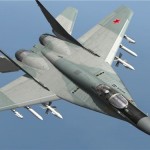 Officials said at least four have crashed after being launched from ships in the Caspian Sea, perhaps because this is the first time Russia is using the new Kaliber missiles in combat.

It is not clear where the missiles might have landed, or whether there are any casualties. Read more at CNN.