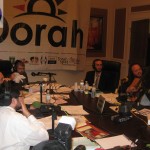 [Video and photos below. ] Tens of thousands of Yidden across the world joined last night to watch, listen or otherwise take part in the annual Oora-thon auction to benefit the renowned kiruv organization. Tens of thousands of viewers logged onto Matzav.com, which featured a webcast of this event for the second straight year, as well as Oorah.org, where many watched the live-stream. The event – perhaps the largest such Jewish event in the world –  was a true kiddush Hashem, drawing tens of thousands across the globe, keeping many entranced until the wee hours of the morning.

In an effort to reach out to the masses, Oorah secured a six-hour time slot on one of the nation’s largest radio networks, WABC 770 AM, which, with its 50,000 watt clear-channel signal, can be heard in 38 states and Canada. This was in addition to the largely successful webcast featured here on Matzav.com and Oorah.org, and the smaller radio station broadcasts throughout the country. Oorah received over 2,800 donations last night alone, Matzav.com learned.

People responded enthusiastically upon seeing firsthand the success Oorah has achieved in its massive kiruv efforts. The program featured interviews with many of the boys and girls who attend Oorah’s summer programs, Shabbatons, learn with Oorah’s Torah-mates, and those who were placed in Jewish schools thanks to Oorah’s assistance.

See below for a short video clip of last night’s auction, in addition to a picture gallery.