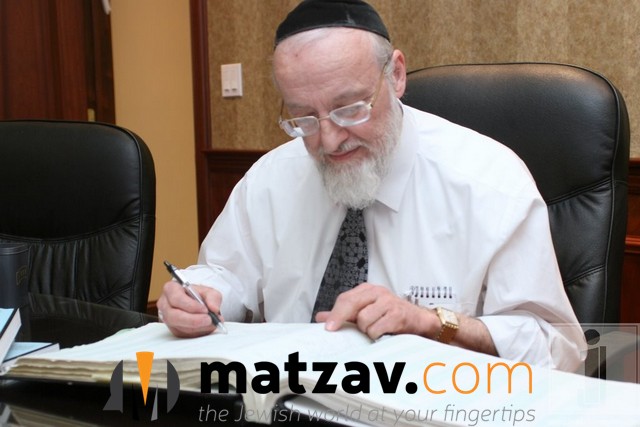 I will be voting for Donald Trump as the candidate choice for president in the New York primary on April 19th and I urge all of the registered Republican voters in Boro Park and Flatbush and in other Orthodox Jewish communities across the state of New York to cast their vote for Donald Trump.

Yirmiyahu Hanovi said to the Jewish people who were exiled to Bavel, “Build homes and settle in and seek the welfare of the city in which you reside and pray for its peace and serenity for in its welfare and serenity, you yourself will have peace and serenity.”

This is the guiding principle for our sojourn in all of the lands and countries that we have lived since we were exiled. We thank G-d and our gracious host, the United States of America, for so kindly accepting us in their midst and letting us thrive and practice our religion and raise families.

As recognized citizens in this great country, we must seek and pray for the welfare of the United States of America. The United States, which is the beacon and hope for all of mankind, has in the last few years undergone a great deterioration. People are struggling to find decent jobs which can produce a livelihood. The concept of the American family where you have a father, mother, children and grandparents living together helping each other and nurturing their children has been denigrated by the leftist parties and media, further deteriorating the moral fabric of our society.

Donald Trump’s campaign theme is “Make America Great Again,” promising to restore prosperity to our country by restarting the economic engine of the United States of America, and shredding and throwing all of the chains such as taxes and regulations that prevent our country from thriving and providing good and meaningful lives for all of our people.

The governmental establishment has never run a large business and has no idea how to make the economy prosper. When New York City was unable to repair and rehabilitate the Central Park skating rink which was neglected for many years, Donald Trump stepped into and restored the skating rink to its previous glory. He will do this for our great country and will restore the United States of America to be once again the beacon and light to the nations of the world.

It is crucial that our communities step up to the plate and come out in great numbers to vote for Donald Trump this Tuesday. He is the current Republican presidential front-runner, and our vote will result in his winning the bulk of the delegates up for grabs to put him over the top, thus eliminating a contentious convention which could fracture the Republican Party. As a result, Donald Trump and the Republican Party will recognize our communities and help us against the elements and forces that have denied our parents and children their inalienable right to educate our children in our private schools.

I will be taking up the cause for the Republican presidential candidate, which I hope will be Donald Trump.

Nachman Caller, an attorney, is the Republican District Leader for the 48th Assembly District in Brooklyn, NY.