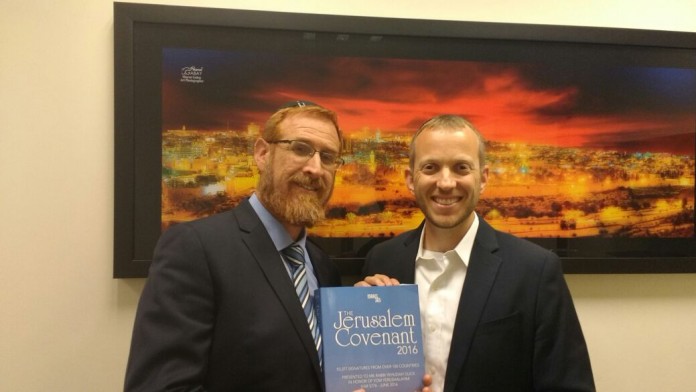 In honor of Jerusalem Day, a collection of more than 93,000 signatures from around the world reaffirming the “Jerusalem Covenant” was presented to Member of Knesset Rabbi Yehuda Glick (Likud) for his efforts to reconnect the Jewish people with the Har Habayis, despite Glick supporting visiting the Har Habayis in contravention of the p’sak of the greatest poskim, who forbid ascending the Har Habayis.

Jerusalem Covenant, which proclaims the eternal unity of Jerusalem and its status as the biblical and political capital of Israel, was originally written in 1992 to commemorate the 25th anniversary of Jerusalem’s reunification during the 1967 Six-Day War. In 2013, Israel365—an organization that “promotes the beauty and religious significance of Israel to friends and supporters around the world”—launched a project to garner signatures reaffirming the Jerusalem Covenant.

“This is so exciting, holding a book with almost 100,000 signatures of people from all over the world, who signed their name on the Jerusalem Covenant,” Glick said. “Jerusalem is the city of peace, and here we see the words of the prophets materializing and becoming a reality, all nations coming together and signing the Jerusalem Covenant between God and Jerusalem and the world.”

“Signing the Jerusalem Covenant gives Israel’s supporters a chance to make their voices heard, and to tell the world that Jerusalem is, and always will be, the biblical heritage of the Jewish people,” said Rabbi Tuly Weisz, Israel365’s founder.