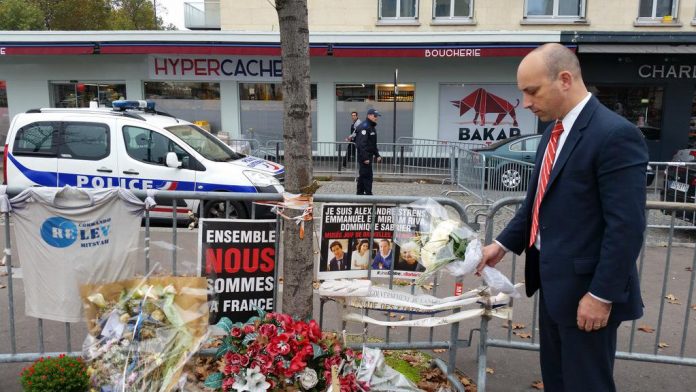 Memorial ceremonies were held in Paris this week to mark the fourth anniversary of a deadly terror attack at a kosher supermarket there.

On Jan. 9, 2015, Amedy Coulibaly — who had pledged allegiance to ISIS — burst in to the Hyper Cacher in Porte de Vincennes in the city’s 20th arrondissement and took more than a dozen hostages.

A multi-hour standoff with police ensued, at the end of which the heavily-armed Coulibaly was killed in an exchange of fire. Four hostages — all Jews — were found murdered inside the store.

The attack occurred two days after 12 people were massacred by a pair of Islamist gunmen at the offices of the satirical magazine Charlie Hebdo in the French capital.

“Our pain is always present, our anger is still strong,” Francis Kalifat — the president of the Representative Council of French Jewish Institutions (CRIF) — said on Wednesday.

A number of US-based Jewish groups also commented on the anniversary.

“The four victims were murdered solely for being Jewish,” the Anti-Defamation League (ADL) said. “We will not stop fighting against antisemitism in Europe and around the globe.”