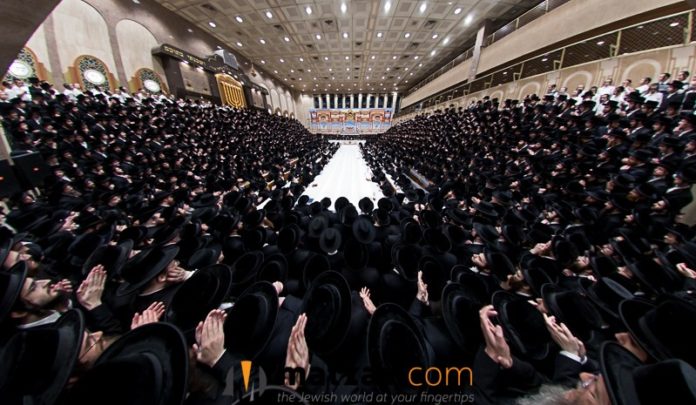 We are living in difficult times.  There’s been much consternation within our community, and rightfully so, about the apparent double standard currently being leveled at us.  We endured the challenges of lockdowns and sheltering in place, but now as the restrictions are being lifted, our playgrounds, our schools and our businesses are still closed.  Most recently, our sleep-away camps are prohibited from opening.

We can point fingers and beat our chests, our blood pressure can boil in frustration, but here’s the bottom line.   For those who are frustrated and don’t understand why our community is not being heard, I have a simple solution.  Start voting.

Yes, elected officials have power, but only to the extent that we empower them.  What do I mean?  When elected officials represent a community that votes in huge numbers, they will take notice.  Our community is vibrant, but relatively small in numbers.  If we vote in a proportion greater than the general population, that would empower us.  When a community votes, they are empowered.

It’s time for our community to wake up.  Many of us don’t vote.  We don’t get involved in local elections and we’re not even registered.  Yet we continue to expect that government regulations and policies will benefit our community, even with minimal effort or involvement on our part.

If I sound frustrated, let me explain.  Several months ago, I accompanied State Assemblyman Simcha Eichenstein as he stood outside a Boro Park shul requesting local residents to sign petitions that would allow our community candidates to appear on the ballot in the upcoming Democratic primary.  It’s a simple petition but it’s significant because without the requisite signatures, our candidates would not be eligible to run for election.  The only requirement is that those who sign must be registered as Democrats.

Look, I get it.  As members of this community, we cherish our timeless values and traditions.  Yes, I realize that many of the electorate who either registered as Republicans or chose not to vote feel that the mandate that defines the current Democratic party is anathema to them.  So how can they identify as card-carrying Democrats when they vehemently oppose the progressive policies that represent the Democratic agenda?  How can they flip a lever in the voting booth in favor of candidates with whom they may have irreconcilable differences?

But we are making a huge mistake.  We need to vote with our brains, not with our hearts.  We need to vote smartly and strategically.  Our community is small in numbers so ultimately our votes will not determine the outcome of statewide or national elections.  But we can make a significant impact in local citywide race.   And more importantly, our local elected officials will sit up and take notice.  This means they will potentially embrace and advocate for the issues that are of paramount importance to us, to whatever extent possible.

By registering as Republicans we have essentially opted out of the system.  We may be making a statement or standing on principal but in the end we have abdicated our voice in the conversation.    Elected officials are essentially politicians.  Their goal is to get elected and when they win, they pay attention to who voted for them.  With the help of modern technology, that can easily be determined.  Just a few clicks can reveal an analysis of community voting patterns.

Do members of our community have profound differences with many of our elected officials on matters of platform and policy?  Certainly.  But we can work together with them to craft an agenda that would benefit us all if we have the political power to do so.  On many occasions, we have accessed City Hall to advance our issues and our agenda.  Yet time and time again our community’s self proclaimed spokespeople accuse anyone who attempts to collaborate for the common good of being a sellout.

Unless an issue personally affects them.  Then they are suddenly eager to ‘make a deal with the devil’.   This is called hypocrisy, plain and simple.

We can make an impact.  Let’s consider the Boro Park community, a vibrant neighborhood with 25,000 families.  If just two people per household would come out and vote in a given election, that would add up to a total of 50,000 votes.  That’s a huge number that could potentially swing a Democratic primary election.  The same can be said for other Jewish neighborhoods across the city.

But instead we bury our heads in the sand and have thus relinquished a precious opportunity and a fiduciary responsibility to our families and our communities.

I may work in government relations, but this is not about me.  I am writing this because I feel that we as a community are being shortchanged.  Democrats outnumber Republicans in New York eight to one.  In other words, any Democrat running for office is virtually assured victory in a general election.  If the numbers were in reverse, and Republicans outnumbered Democrats, I would be urging us all to register as Republicans.  But this is the reality, and we have to deal with it.  And our primary task is to ensure that the Democrat who will ultimately be on the ticket best represents us and will present us with the best possible leverage.

Other communities are voting, you can be sure of that.  Our absence in the voting booth essentially empowers them further.  We are relinquishing our constitutional rights and handing them over on a silver platter, thereby greatly diminishing our clout.  All because we stubbornly insist on clinging to principles that hold no practical purpose.

Our community cares deeply about the issues that affect us.  But we are essentially tying the hands of our local representatives if we cannot even sign a simple petition.  They will not be able to address our issues or advocate for our needs because we are not engaged in the process.

I’ll never forget one community member who we approached on that painful evening in front of the shul.  He praised Simcha for his service while also commenting about the need for wheelchair accessibility at our local subway stations.  It was an issue that was clearly important to him.  Yet that very same person was offended when I jumped in and asked if he was registered to vote.  He self righteously refused to register, yet he insisted on pontificating about an issue that he believes in.

There are plenty of issues that this community cares deeply about, most notably the future of our children’s education.  But if we are frustrated about government intrusion into our community’s affairs or about the lack of progress on these issues, let’s ask ourselves this.  Have I voted in a recent election?  Am I even registered to vote?  Am I doing my part in advocating on behalf of my community?  If not, who do I have to blame?

Let’s not opt out of the system.  Let’s be engaged, at least minimally, in the process and perhaps we can change the system.  If we can’t vote, then we don’t count.  And if we don’t count then our beliefs, our traditions, and our values won’t matter to our city and state lawmakers.

Ezra Friedlander is the CEO of The Friedlander Group, a public policy consulting firm based in NYC and Washington DC.