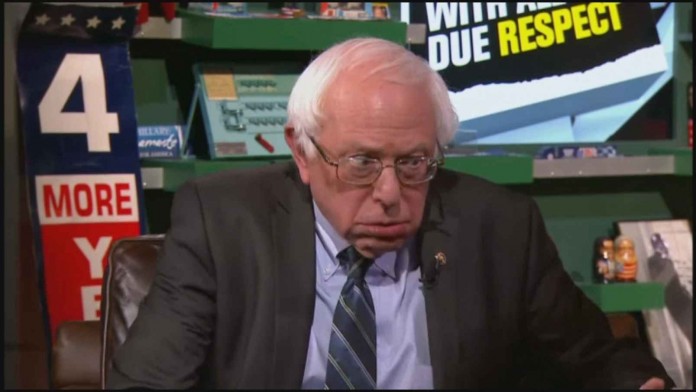 Bernie Sanders is wrong. This isn’t even in dispute.

Sanders:… my recollection is over 10,000 innocent people were killed in Gaza. Does that sound right?

Even assuming that every Hamas terrorist and accessory was “innocent”, that’s four times the number of total people killed in the last conflict.

But while the 10,000 figure is the banner headline, the real story seems to be an incoherent interview which reveals that Bernie Sanders knows little about what’s going on and has no actual policy. Trump gets blasted for this often enough while Sanders gets a pass when he quotes imaginary figures and really seems not to know what he’s talking about.

I have criticized Bernie Sanders for being anti-Israel, and there’s a dose of that in the interview, but mostly it’s dominated by a kind of ‘meh-ness’. Bernie isn’t interested in foreign policy and it shows. In some ways he seems less interested in pressuring Israel or having any kind of plan than some Republicans.

Daily News: Okay. You’ve called not just for a halting construction of so-called settlements on the West Bank, but you’ve also called for pulling back settlements, just as Israel did in Gaza. Describe the pullback that you have in mind.

Which is exactly the kind of attitude plenty on the Israeli right would celebrate who are tired of presidents trying to run their country.

But in practice, Bernie Sanders wants to forcibly evict Israeli Jews from their homes, but leave it up to Israel whom to evict? This is borderline incoherent. And it doesn’t get any better…

Sanders: Well, again, you’re asking me a very fair question, and if I had some paper in front of me, I would give you a better answer. But I think if the expansion was illegal, moving into territory that was not their territory, I think withdrawal from those territories is appropriate.

Daily News: And who makes the call about illegality, in your mind?

Sanders: Well, I think that’s based on previous treaties and ideas. I happen to think that those expansions were illegal.

What defines illegality? Bernie Sanders has no idea. Treaties? At some point his advisers will tell him the UN and then it will get truly messy. Bernie Sanders is against “illegal settlements”, which are actually just Jews living in territory conquered by Muslim invaders in ’48 and liberated by Israel in ’67, but has no idea what they are or what defines Israeli territory.

Daily News: Okay, so if we were to find Israeli settlements, so-called settlements, in places that has been designated to be illegal, you would expect Israel to be pulling them back?

Sanders: Israel will make their own decisions. They are a government, an independent nation. But to the degree that they want us to have a positive relationship, I think they’re going to have to improve their relationship with the Palestinians.

Except of course Israel hasn’t been allowed to make its own decisions and there’s no way to fix that relationship with terrorists.

Daily News: Okay, but I’m just talking about, you’d be getting involved in the negotiations, and this would be setting a benchmark for the negotiations that you would enter the talks, if you do, having conveyed to both parties, including the Palestinians, that there’s a condition here that you want Israel to remove what you described as “illegal settlements.” That’s going to be the baseline. Now, if you’re really…

Sanders: Well, there’s going to be a lot of things on the baselines. There are going to be demands being made of the Palestinian folks as well. When you sit down and negotiate, obviously…

Daily News: And what are those demands?

Sanders: Well, for a start, the absolute condemnation of all terrorist attacks. The idea that in Gaza there were buildings being used to construct missiles and bombs and tunnels, that is not where foreign aid should go. Foreign aid should go to housing and schools, not the development of bombs and missiles.

Anyone who knows anything about the conflict is sighing at this point. There’s anti-Israel material and pro-Israel material mixed in here almost at random with no regard for reality.

But you get the sense that Bernie Sanders doesn’t know much about this or cares, that there may even be good intentions underneath, but that his policy will get set by the left-wing advisers he’s listening to. The dominant theme is that he’s just not particularly interested. Which in some ways is a plus.

Hillary Clinton will certainly be on a “Get Israel” mission. Bernie Sanders is signaling more anti-Israel views, but ones that he isn’t committed to or especially invested in. This is the Democratic Party now. Stick your hand in the box. Find the lesser of two evils.

And then it gets worse…

Daily News: Okay. Now, you have obviously condemned Hamas for indiscriminate rocket attacks and the construction of the military tunnels. But you’ve also criticized Israel for what you described as a disproportionate response.

Daily News: And I’m going to look at 2014, which was the latest conflict. What should Israel have done instead?

So again, Bernie Sanders is critical of Israel, but avoids specifics. He doesn’t want to make decisions for the Israeli military. Which is nice. But he has the sense some bad stuff happened.

At least he’s being more honest that he admits that he has no idea what a proportionate or disproportionate response is. But then why express your view in the first place?

Sanders: But I think it is fair to say that the level of attacks against civilian areas…and I do know that the Palestinians, some of them, were using civilian areas to launch missiles. Makes it very difficult. But I think most international observers would say that the attacks against Gaza were indiscriminate and that a lot of innocent people were killed who should not have been killed. Look, we are living, for better or worse, in a world of high technology, whether it’s drones out there that could, you know, take your nose off, and Israel has that technology. And I think there is a general belief that, with that technology, they could have been more discriminate in terms of taking out weapons that were threatening them.

That’s Magical Drone Theory. It’s okay for taking out the occasional terror leader, but you’re not going to fight a war with drones.

Daily News: Do you support the Palestinian leadership’s attempt to use the International Criminal Court to litigate some of these issues to establish that, in their view, Israel had committed essentially war crimes?

Daily News: Why not?

Daily News: Why not, why it…

Sanders: Look, why don’t I support a million things in the world? I’m just telling you that I happen to believe…anybody help me out here, because I don’t remember the figures, but my recollection is over 10,000 innocent people were killed in Gaza. Does that sound right?

Sanders: I don’t have it in my number…but I think it’s over 10,000. My understanding is that a whole lot of apartment houses were leveled. Hospitals, I think, were bombed. So yeah, I do believe and I don’t think I’m alone in believing that Israel’s force was more indiscriminate than it should have been.

Daily News: Okay. We will check the facts. I don’t want to venture a number that I’m not sure on, but we will check those facts. Now, talk about Hamas. What is it? Is it a terrorist organization?

Sanders: I don’t know the answer to that. What I do know is that drones are a modern weapon. When used effectively, when taking out ISIS or terrorist leaders, that’s pretty impressive. When bombing wedding parties of innocent people and killing dozens of them, that is, needless to say, not effective and enormously counterproductive. So whatever the mechanism, whoever is in control of that policy, it has to be refined so that we are killing the people we want to kill and not innocent collateral damage.

So again, he has no idea what he’s talking about. And isn’t even offering actual proposals. I can’t help but wonder what in the world would happen if he did find himself in the White House.

Daily News: Okay. American Special Forces recently killed a top ISIS commander, after they’d hoped to capture him. They felt, from what the news reports were, that they had no choice at that. What would you do with a captured ISIS commander?

Sanders: And try to get as much information out of him. If the question leads us to Guantanamo…

Daily News: Well, no, separate and apart from Guantanamo, it could be there, it could be anywhere. Where would a President Sanders imprison, interrogate? What would you do?

Sanders: Actually I haven’t thought about it a whole lot. I suppose, somewhere near the locale where that person was captured. The best location where that individual would be safely secured in a way that we can get information out of him.

Daily News: Would it be in the United States?

Sanders: Would it be in the United States? It could be, yeah.

Again, I’m just beating a dead horse here. But the Daily News’ goal is to Trump him and they have no problems making their case.

Daily News: You are. Why is that?

Sanders: Because I think the death penalty does not prove to be effective in stopping the crimes that we want to see stopping. And second of all, at a time when virtually every major country on Earth has eliminated the death penalty, for right reasons. In a world of as much violence as currently exists, I don’t believe government, our government, should be involved in killing.

Daily News: But you place Khalid Sheikh Mohammed, if you do, I’m asking, in the same moral basket as the street criminals under that…

Sanders: No. I place him as a murderous disgusting terrorist, and we have seen in this country terrible crimes have been…I don’t need to explain to anybody in this room people coming out with automatic weapons and killing children in Sandy Hook. Disgusting crimes. I happen to believe that, in the long run, from a moral perspective, and from an effectiveness perspective, the death penalty does not work.

Daily News: But you would have no hesitation about killing him if a drone found him on a battlefield?

Sanders: Well, unfortunately we live in a…that’s right. There is a difference. If I have you captured and I kill you, it’s different than killing you on the battlefield. I think that is a very different moral…but if you’re asking me am a pacifist, don’t believe in killing people in war, that’s not my position.

Don’t ask him what his position is because he has no idea.

Leave a Reply to got something right Cancel reply