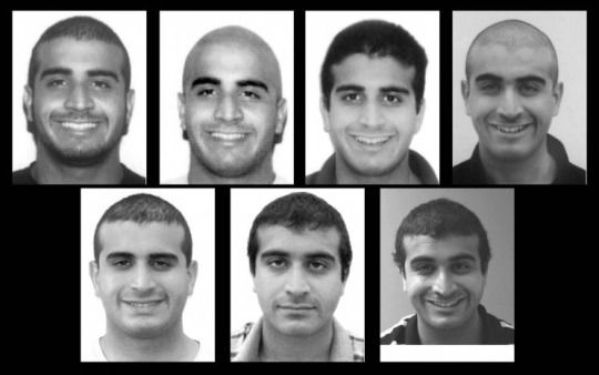 After an initial burst of fire between Omar Mateen and a security guard at the Pulse nightclub, a group of five to six police officers arrived on the scene within minutes, broke through a large glass window and entered the club as the killing of 49 people was underway inside, according to a Belle Isle police officer who was among the first responders.

In the first public accounting of those critical early minutes by an officer who actually went inside the club, Belle Isle police officer Brandon Cornwell, 25, said the ad-hoc team spent the first seconds inside “trying to locate exactly where the shooter was – we kept hearing people scream and shots fired.”

Cornwell said they never saw Mateen; he said the shooter had vanished inside the dimly lit club as Cornwell and the other officers followed the sounds of screams and echoing gunfire to the bathroom area where they presumed the gunman was now holed up. He said they aimed their assault rifles toward that area as the sounds of gunfire stopped. He said that they then followed orders to hold their position for what he described as “15 or 20 minutes – could’ve been longer” until the SWAT team arrived.

What is not entirely clear from Cornwell’s statements is whether the officers spent that entire period inside the club, guns aimed at the bathroom area, or whether they withdrew at some point to the outside of the club before SWAT arrived, leaving Mateen time to move freely about the club and possibly start shooting again. Cornwell declined to clarify this point among others, citing the ongoing investigation and instructions not to talk about such details.

He did not second-guess the decision to hold their position rather than attempt to go into the area where Mateen had hostages, or offer his own opinion on the matter.

“We just basically stayed there, waited for movement, and we just held our position until SWAT got there,” said Cornwell, 25, who never fired his weapon. “Once SWAT got there they told us to retreat, that they’d take over because we were not really in tactical gear – we were just in our police uniforms.”

As the FBI continues its investigation of the worst mass shooting in U.S. history, Cornwell and his fellow officers’ early standoff with the shooter – the second of three encounters between law enforcement and Mateen over more than three hours Sunday morning – is being scrutinized by the Florida Department of Law Enforcement’s Public Integrity Squad along with the other police encounters with the shooter. None of the officers involved have spoken publicly, though Cornwell and others are scheduled to be in attendance Tuesday afternoon when Attorney General Loretta Lynch holds a news conference on the shooting.

That Cornwell was even in the vicinity of the Pulse Nightclub at 2 a.m. Sunday was largely a matter of coincidence. The tiny Belle Isle Police Department, situated just south of Orlando in a sleepy community of pale houses and Spanish moss, has an agreement to assist the community of Edgewood, which is near the Pulse nightclub. Cornwell, a second-year police officer who served with the Army National Guard in Iraq, said he was helping with a traffic stop when he heard the call on his radio that shots had been fired at Pulse. He said he arrived “in 38 seconds.”

“It was a straight shot there and I hit every green light,” said Cornwell, who spoke with The Washington Post at Belle Isle’s City Hall in the presence of the Belle Isle police chief, who occasionally stopped him from offering too much detail, and two colleagues who also responded to the shooting but did not go inside the club.

Cornwell was one of the first seven or so police cars to arrive on the scene, where officers were getting out of their cars with their assault rifles, he said.

Cornwell converged on the south side of the building near the main entrance with perhaps five other officers, all from the Orlando police department, which he referred to as OPD.

“There happens to be an OPD lieutenant commander who was there, and he says we’ve got to go in,” said Cornwell. “No one disagreed. One of the officers busted out one of those side windows” – it was approximately 10 feet tall – “and we just went in and went from there.”

He estimated that “no more than two minutes” had elapsed since they arrived, and they were now inside the club.

Cornwell said Mateen was nowhere to be seen. The club was dim – lit with a disco ball and colored lights — and quiet except for the sound of the shooter’s gunfire, screams and cries for help, Cornwell said.

“He was actively shooting,” he said. “I can’t say if he was targeting us. But he was still shooting in that location where he was at. There were bullet holes in the wall, so he had shot through the wall. But I couldn’t tell you if he was shooting at us.”

Cornwell and the other officers immediately began “clearing rooms” one by one – not knowing if there was one or possibly more shooters – and trying to locate the source of the gunfire. The sound of the shots was echoing all around the club making it difficult to tell exactly where it was coming from, he said. But fairly quickly – Cornwell said “within minutes” – officers located Mateen in the bathroom area.

At that point, he said, “we took up a tactical position by the bar standpoint in the middle of the club.” As he aimed his AR-15 assault rifle toward the bathroom door, he said, the shooting stopped. And it was then that the “15 or 20 minute” holding pattern began, he said.

Though Cornwell cannot recall exactly how he understood his orders – whether it came on the radio or was verbal – his clear understanding was that he and his fellow officers were to hold their position rather than attempt to go into the bathroom after the shooter.

Minutes passed as he kept aiming toward the bathroom, he said. He could hear people scream. There were people lying all over the floor of the club. He kept aiming, waiting for SWAT. More screams. He and the other officers held their position, focused on the bathroom, where he could see “some movement inside,” he said.

Asked whether he felt an urge to pursue the shooter at that point, Cornwell said, “I couldn’t tell you. I was following lieutenant’s command.”

At some point during the 15 to 20 minutes – it is unclear exactly when – Cornwell and the others in the group of first responders withdrew to the outside of the club, he said.

“We got word from higher up, and it was communicated to the OPD lieutenant that we needed to withdraw,” he said. “So we came back outside. And waited for SWAT. SWAT arrived. SWAT handled everything from there.”

It was only the first half hour or so of the ordeal.

Outside, Cornwell said he spent the next several hours helping to transport victims to ambulances. He arrived back at the Belle Isle police department Sunday afternoon, his uniform and all his equipment saturated with blood.