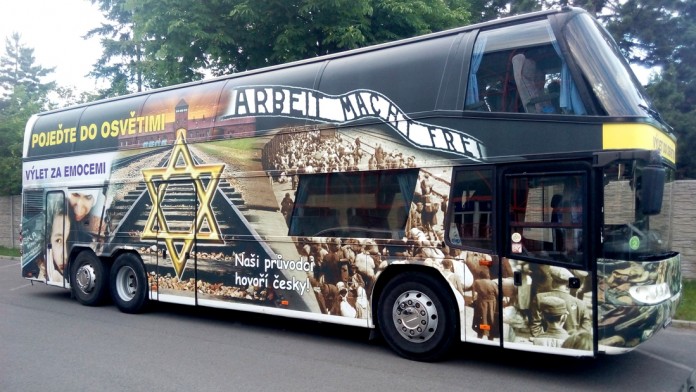 Jewish groups and Holocaust survivors are outraged over a bus in the Czech Republic advertising a satirical holiday tour of the Auschwitz death camp.

The double-decker tour bus is emblazoned with the camp’s notorious sign “Arbeit Macht Frei” along with a Star of David and images of Jewish holocaust victims. Text along the side of the vehicle suggests visitors should “Come to Auschwitz — A journey through emotions. Our guides speak Czech!”

The bus was used as a prop in an old satirical film by Czech director Vit Klusak, who looked at Eastern Europe’s emerging Holocaust industry, according to the Times of Israel. After the film wrapped production, the bus was sold to a local tour company that refused to remove the images.

Prague Jewish Museum Director Leo Pavlat has asked that the images be removed, but the owner of the bus, Svatopluk Xaver, said he couldn’t afford the cost of repainting the bus and removing the decorations.

Holocaust survivor Erika Bezdickova, whose entire family was murdered at Auschwitz, told the Daily Mail she was “appalled” at the site of the bus.

“I think that only a person with no moral decency could make a business out of the Auschwitz catastrophe,” she said. JNS.ORG