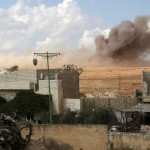 At least 32 Islamic State fighters were killed and 40 more wounded in Syria’s Raqqa province on Sunday, in a series of air strikes believed to be carried out by a U.S.-led coalition targeting the jihadists, a monitoring group said.

More than 15 explosions hit Islamic State positions in the countryside of Raqqa province and near its capital, Raqqa city, the Britain-based Syrian Observatory for Human Rights said. Raqqa is Islamic State’s Syrian stronghold.

The coalition said it hit Raqqa and other areas of northern and eastern Syria on Sunday.

In central Syria, at least 45 air strikes, probably carried out by Russia, hit the city of Palmyra, which is also under Islamic State’s control, the Observatory said. Injuries were reported, but no details on the casualty toll were available.

The United States and its allies have been bombing Islamic State in Iraq and Syria in an effort to drive the group from swathes of territory it controls in both countries. Read more.