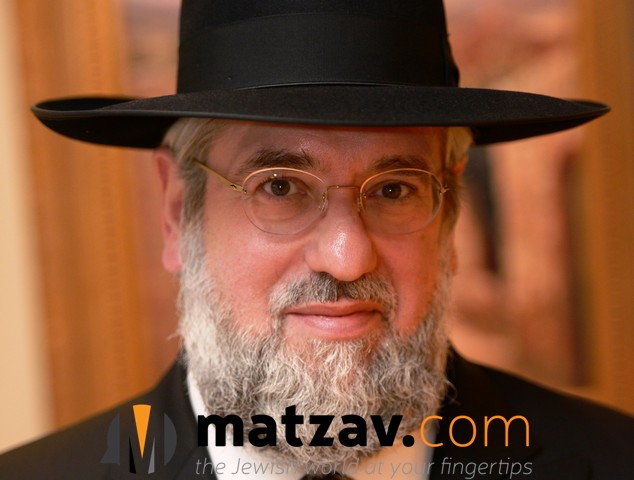 It was, in a sense, the first gathering of the Bnei Yisroel, the twelve pillars of our nation surrounding the bedside of their father. Yaakov Avinu looked at each of his sons in turn, focusing on their gifts and challenges, studying their destiny, before bestowing the brachos and tefillos that would accompany them and their progeny for eternity.

Looking at Levi, Yaakov foresaw a road with some bumps, but one that climbed to the loftiest of callings, the right to serve in Hashem’s earthly home, standing guard over the Bais Hamikdosh and its sacred keilim.

But he also saw something else, the dark and turbulent events of this week’s parsha, the uprising of Korach and his people against the leadership of Moshe Rabbeinu.

“Bekehalam al teichad kevodi. I want no part in it,” Yaakov Avinu pleaded. Therefore, Rashi tells us, Korach’s lineage is traced back to Levi, but not to Yaakov Avinu.

It’s puzzling. If Yaakov foresaw the incident, why did he not ask that there be no machlokes altogether? Why not daven that Hashem’s trusted messenger be untarnished by this rebellion? Why didn’t he daven that Klal Yisroel should not rise up against Moshe?

When his grandfather, Avrohom Avinu, sensed that Sedom was on the verge of destruction, he began to daven, as improbable as the chances were of there being many tzaddikim in Sedom in whose merit the city could be saved. Yet, his concern for all mankind led him to daven in a valiant attempt to prevent the judgment from being carried out. Why didn’t Yaakov attempt to use tefillah to try to prevent the ugly story from happening?

Perhaps the explanation is that at the root of the machlokes was jealousy. Korach was jealous of Moshe and Aharon, and he was upset that he wasn’t recognized for his greatness and given the position of leadership that he felt he deserved. Yaakov wanted it to be clear that this middah ra’ah was not traced back to him.

Jealousy is part of the teva with which Hashem created the world.

Back at the very onset of creation, the great luminaries, the sun and the moon, fell prey to jealousy. “Who will rule? Who will be bigger?” they questioned.

The upper waters and the lower waters got locked in an epic and enduring battle, each pining for Divine closeness at the expense of the other.

Jealousy is built into creation. It is part of human nature.

Kayin encountered Hevel and revealed the most basic human emotion.

Man ventured forth into the world, interacting with other humans, engaging in commerce and conversation, and there were always undertones of jealousy, competition and rivalry.

Perhaps we can say that Yaakov didn’t feel it proper to ask that Hashem change the teva ha’adam, as per the general rule that we are not mispallel to change teva (see Pachad Yitzchok, Rosh Hashanah, Ma’amarim 10 and 33). Additionally, Yaakov was the av who declared, “Katonti mikol hachassodim umikol ha’emes.” The Medrash Hagadol Toldos relates that Rabi Yanai said that a person should not stand in a dangerous place and say that a miracle will occur for him. Firstly, perhaps he won’t merit the miracle, and even if he does, it will diminish his zechuyos. Rabi Chonon adds that this is derived from Yaakov Avinu, who said, “Katonti mikol hachassodim umikol ha’emes.” w

Yaakov felt that it would be fruitless for him to daven to change the teva ha’odam. He felt that he could only daven that he shouldn’t be included in the rebellion that would ensue years later on account of jealousy, praying that the machlokes shouldn’t be traced back to him.

Human nature is not always what we want it to be. Ki yeitzer lev ha’adam ra mine’urav. It requires much work for man to break his inclinations and middos ra’os and make a mentch of himself.

It is the goal of the human experience to try to cultivate the G-dly and subjugate the animalistic tendencies that combine to make us what we are. Those whose lives follow Torah can subdue their base human inclinations, such as the trait of jealousy and the propensity for machlokes. Torah has the ability to cure man of pettiness and help him rise above societal ills.

Yaakov was an ish tom yosheiv ohalim. He was purified and cleansed by Torah and its mussar. Having devoted his energy and strength to rising above human frailties, he felt that the machlokes had no connection to him. He wanted to demonstrate that although teva dictates that human interactions lead people to be consumed by jealousy, the condition is not terminal, as one who is a yosheiv ohalim and works on himself to be subservient to the precepts of Torah until he becomes an ish tom, can win these battles and actually change his teva.

When Yaakov Avinu beheld Levi, he saw the unfortunate results of jealousy and rivalry, but he also saw something else: the lofty destiny of the shevet and the koach they possess to rise above it all. The fruition of this vision is found later in this week’s parsha.

The pesukim in perek 18 following the tragedy of Korach relate that Hakadosh Boruch Hu tells Aharon what to do to ensure that there won’t be another catastrophe such as the one that took place with Korach and his eidah. Hashem tells Aharon that he, the kohanim and shevet Levi, should be “shomer mishmeres” and then there will be no more “ketzef” on the Bnei Yisroel. The posuk explains that Hashem has separated the kohanim and Leviim from the Bnei Yisroel. They will not engage in everyday commerce with the rest of the Jews. They will perform their work in the Temple of Hashem. They will do the avodah in the Ohel Moed and will receive no nachalah, portion, in Eretz Yisroel. Hashem will be their cheilek and nachalah.

To understand the correlation, we examine the famous words of the Rambam at the end of Hilchos Shmittah V’Yovel (13:12-13). He explains that Levi did not receive any nachalah, because he was chosen to serve Hashem in the Mishkan to teach His righteous ways and laws to the rest of the people. Therefore, says the Rambam, they were separated – “huvdolu midarkei ha’olam.”

In other words, in order to ensure that there would never be another ketzef such as that which took place in the time of Korach, shevet Levi was separated and removed midarkei ha’olam, from the ways of the world. They didn’t engage in regular business and interactions, as others do, because to do so would once again cause them to become jealous and argumentative. To prevent them from reverting to the teva of man which leads to jealousy and rivalry, allowing human failings to manifest themselves and cause “ketzef,” they could no longer engage in the type of human interaction which exposes mortal weaknesses.

From that point forward, Levi would not be subject to these pressures, but would instead be dedicated fully to Hashem’s work. For the only way a person can overcome issues which lead to machlokes and bitterness is by dedicating himself to the avodah of Hashem, and rising above mundane everyday commerce. It is only by dedication to the precepts and teachings of the Torah in all we do that we are able to rise above the subliminal earthiness which seeks man’s downfall.

Thus, the Rambam states in the following halacha that this mode of life is not only reserved for kohanim and Leviim, but can be followed by anyone who sees the light and wishes to earn for himself a life of blessing and peace, walking a straight path and cleansing himself of human trivialities and foibles.

Korach was blinded and hindered by his negios. His desire for personal advancement grew out of his jealousy of Moshe and Aharon. He couldn’t rise above the teva. It seems strange to us, but he was able to convince all the great men of Klal Yisroel to join him in his rebellion. For it wasn’t only Korach who was consumed by jealousy, but others as well. They all wanted the “big job.” Their vision was hampered as well, and they were unable to perceive Moshe’s greatness. Jealousy so clouded their vision and dulled their senses that they were rendered unable to appreciate the significance of what happened to the meraglim, who had doubted Moshe. They weren’t able to rise above the teva of anoshim and thus brought ketzef upon themselves and others.

As we study the parsha, we have the benefit of hindsight, the clarity of Rashi’s lens, and the Rambam’s lucid perspective. We delve into the explanations of the tale and think about how such smart and righteous people could sin so terribly and err so badly. We learn the pesukim, the Rashis and the Rambam, and we resolve to become better bnei Torah, baalei mussar and anshei tom in order to rise above the middos ra’os that can bring down lesser men.

It is possible for a human being to rise to such heights at which he soars above agendas and pettiness, and his sole concern is for the will of the Ribbono Shel Olam and the good of His children. May we all merit to aspire to, and reach, that level.