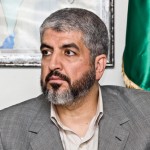 Peace talks in Cairo collapsed this week after Hamas launched a fresh round of rockets at Israel, despite a cease-fire. Israel has responded by assassinating three senior Hamas terrorists as well as targeting another senior leader, Mohammed Deif. There are conflicting reports on whether or not Deif was killed in the airstrike.

The meeting between Abbas and Mashaal came amid reports that Qatar, the Muslim Brotherhood, and Hamas are undermining Egyptian-led efforts to forge a permanent cease-fire.

Additionally, it was reported that Egypt has refused to allow Qatar to play a role in the cease-fire negotiations unless it apologizes for its support of the Muslim Brotherhood.