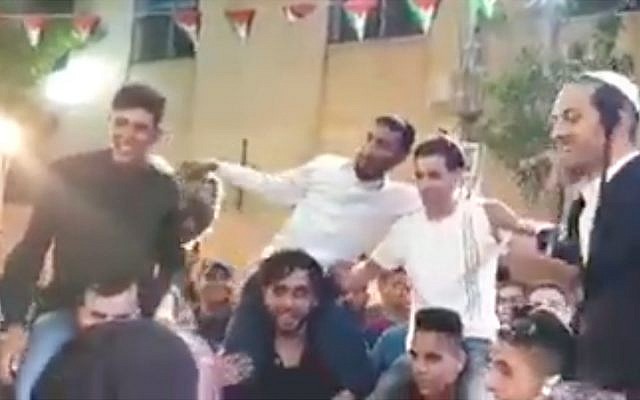 This is from Hamodia:

An invitation to several chareidi youths to join in his son’s wedding has cost the mayor of the Palestinian Authority-controlled village of Dir Kadis his job. The four Jews, whom the mayor claims were invited to “embarrass” him, were seen in a widely distributed video singing and dancing at the wedding, clearly as welcome guests — and as a result, the mayor has been fired and removed from his position on the PA’s Education Committee, Haaretz reported Sunday.

The incident took place last Wednesday, as the son of Radi Nasser was wed. Four Jews, residents of Modiin Ilit (Kiryat Sefer), attended the wedding in the nearby village. The son worked with the Jews in Modiin Ilit, and apparently invited them to the wedding. Footage of the event shows a happy circle of dancers, with the Jews hoisted on the shoulders of the guests as they celebrated the event.

But when the footage hit social media sites, the recriminations began. The Fatah movement, of whom Nasser was a member, condemned the dancing, saying that it was “insulting” to Palestinians. Nasser was summarily thrown out of Fatah. Editorials in PA newspapers reiterated the “insult” narrative, saying that Palestinians should not be inviting “representatives of the occupation” to their events.

Nasser attempted to deny that he invited the youths. “They were invited by garage workers at the entrance of the village who fix the Jews’ cars,” he said, adding that they were put up to it by his political enemies, and that he had the youths thrown out of the wedding when he found out what was happening. But the denials fell on deaf ears — at least in part because he is seen dancing with them.

Fatah said that a no-confidence meeting would be held to remove Nasser from office and that the names of the Jewish attendees would be passed on to the Palestinian security forces.

Dar Kadis is near the Jewish community of Modi’in Illit. I am told that while most Jews won’t go visit that village anymore, there are still plenty that do, to buy products or to have their cars repaired. There is enough business from Jews from Modi’in Illit, Hashmonaim, Matityahu, and other communities that Dar Kadis businesses are dependent on it.

So it is not at all surprising that there are friendships between these “Jewish settlers” and their Arab neighbors. In this case, the antisemitism was directed from the Palestinian Authority (PA) as official policy. Being friends with Jews is a fireable offense. But remember, the PA isn’t antisemitic.

Elder of Ziyon has been blogging about Israel and the Arab world for a really long time now. He also controls the world, but deep down, you already knew that.