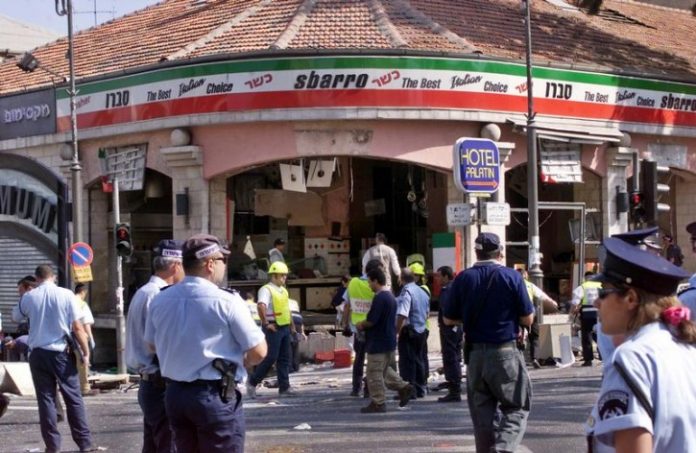 17 years ago today a suicide bomber entered the Sbarro pizza shop in downtown Jerusalem, detonated his suicide vest and murdered 15 people. The murdered in the August 9, 2001 bombing included 7 children as well as a couple and three of their children, an American citizen and a Brazilian citizen. 130 people were injured.

The suicide bomber was Izz al-Din Al-Masri. His family has received $50,124 as a reward for his suicide bombing.

The terrorist who planned the attack and brought the bomber to Sbarro was Ahlam Tamimi. Tamimi was arrested in September 2001 and received 16 life sentences. In 2011, Tamimi was released as part of the deal to free Israeli soldier Gilad Shalit from his Hamas captors. For her time in prison she has been rewarded by the PA with salary payments of at least $52,681.

The suicide belt was built by Hamas bomb- builder Abdallah Barghouti. Barghouti was arrested in May 2003, and received 67 life sentences – 15 of them for building the bomb used to murder the people in Sbarro. He has received salary payments from the PA of at least $191,526.

By September 2018, the PA will have cumulatively rewarded Barghouti, Tamimi, and the family of Al-Masri with at least $294,332.

PA law mandates that every terrorist imprisoned by Israel receive a monthly salary for the full duration of his/her time in prison and often even after his/her release. The PA also pays monthly allowances to the families of terrorist so-called “Martyrs.” By declaring a murderer as a “Martyr”, the PA is saying that he did an exemplary act according to Islam, for which he will be rewarded in the afterlife by Allah.