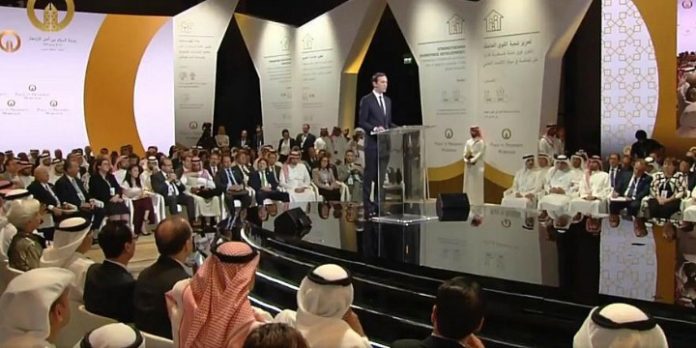 According to Israel’s Kan 11 news, Abu Mayala had been taken in for questioning by P.A. intelligence shortly after returning home from the conference. The P.A. would not give a reason for the arrest.

Reports indicate that the P.A. also attempted to arrest some of the other 15 Palestinian participants in the American-led conference, but were unsuccessful because the individuals in question had taken refuge in Israeli-controlled areas. Palestinian businessman and conference participant Ashraf Jabari told The Jerusalem Post that P.A. security forces had raided three other homes in Hebron.

U.S. Middle East envoy Jason Greenblatt wrote on Twitter: “We are pleased the PA has released the Palestinian they arrested after attending the Peace to Prosperity workshop. We look fwd to continuing our conversation w all who attended the workshop & anyone else who wants a better future for the Palestinians,”

The P.A. boycotted the Bahrain conference almost immediately after it was announced, despite the plan’s aim to raise over $50 billion in projects and investments with the goal of lowering Palestinian unemployment, doubling the Palestinian gross domestic product and slashing the Palestinian poverty rate by as much as half.

The P.A. has severed ties with the United States since its official recognition of Jerusalem as the capital of Israel in December 2017.

“It is shameless for some to claim that Palestinians were threatened or prevented to attend Manama workshop,” Saeb Erekat, the secretary general of the PLO Executive Committee, tweeted on the first day of the conference.

Erekat even urged anyone who felt unsafe about attending the conference to contact him personally.

“If any Palestinian was invited to the Manama workshop, and did not go because he/she were threatened or prevented by the PLO, Palestinian National Authority, Palestinian factions or parties, please do not hesitate to contact me in any way you see fit,” he wrote.