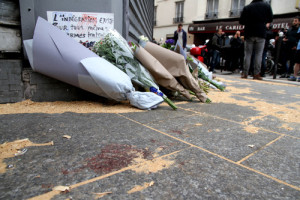 The Palestinian Authority (PA) and the Fatah movement of PA president Mahmoud Abbas responded to Friday’s terror attacks in Paris by drawing a false comparison between Israel and ISIS, and publishing an article blaming the Jewish state for the mass slaughter, watchdog Palestinian Media Watch (PMW) reported on Sunday.

Fatah on Saturday posted an image on Twitter showing the Palestinian flag alongside the flags of Russia, Lebanon and France, with the caption: “Terror is terror.” The flags alluded to the recent ISIS terror attacks that took place in and against those countries, including last month’s explosion on a Russian plane flying over Egypt’s Sinai that killed 224 people.

Fatah went on to directly equate Israeli policy toward Palestinians and the mass premeditated murder committed by ISIS in Paris and in Egypt. The group wrote on Twitter, “Terror is terror and we condemn all terror. Be it destroying houses in Nablus and killing our children by Israel or hitting a Russian plane over Egypt. The Paris attacks are criminal acts done by coward terrorists.”

Fatah also posted a statement from its spokesperson in Europe, who indicated that Israel is really to blame for the Paris attacks because it “breeds violence in the entire world,” PMW reported.

On Sunday, the official PA daily al-Hayat al-Jadida published an op-ed blaming Israel’s Mossad intelligence agency, and its “octopus arms,” for the six coordinated attacks in Paris that killed at least 132 people and injured over 350. The article alleged that it’s no coincidence that “human blood was exploded in Paris” at the same time that “certain European sanctions” are being implemented.” The author was referring to the European Union’s recent decision to approve guidelines that require member states to stop carrying the “Made in Israel” label for products made in the West Bank, east Jerusalem and the Golan Heights.

The piece also claimed that Israel will benefit from the Paris attacks, which serve the “goals” of Israeli Prime Minister Netanyahu, who “hides in his soul enough evil to burn the world,” PMW reported.

The PA daily reiterated Fatah’s libel comparing Israel to ISIS by publishing a cartoon showing an Israeli decapitating the Al-Aqsa Mosque alongside an ISIS terrorist beheading a hostage.

WAFA, the official PA news agency, reported that Abbas condemned the terror attacks, but then reiterated Fatah’s position by implicating Israel in the violence.

Palestinian National Council member Bassam Abu Sharif also blamed Israel for the attacks in Paris, according to PMW. He criticized US and Western leaders for not taking a stand against Israel and the “Zionists,” and implied that the West had a hand in the attacks, because it has “used terror organizations before” to carry out Israel’s and their own “schemes” in the Middle East.