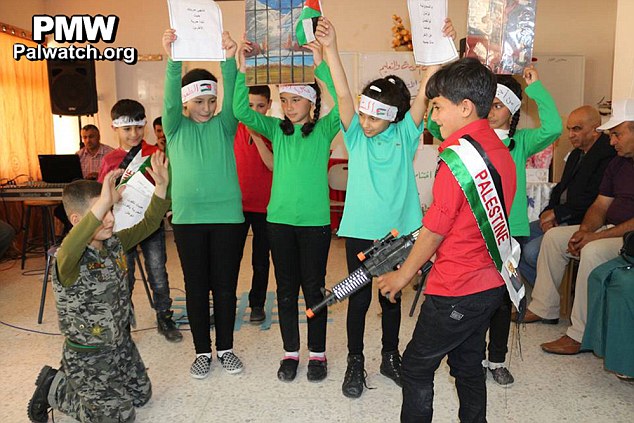 Pictures of “martyrs” are posted on school walls, revolutionary slogans and symbols are painted on the premises, and children are encouraged to act out shooting Israeli soldiers in plays. Joan Ryan, chair of Labour Friends of Israel, said: “We cannot stand idly by while the Palestinian Authority sanctions anti-Semitic incitement which poisons young minds and makes a two-state solution ever more difficult to achieve.”

Itamar Marcus, the director of Palestinian Media Watch, said, “Britain and the European Union bear responsibility for this terror when they are funding a school system that is actively promoting, and thereby creating, terrorism. This is simply child abuse, encouraging kids to die in armed struggle.”

Western donors, stung by accusations of aiding terrorism, forced the PA to change its school curriculum. But teachers said they ignored the bans on certain issues, claiming their leaders agreed to controls just to obtain aid cash. However, Anwar Abu Quak, an English teacher in Ramallah, asked, “Where does all this aid money go? First look at the schools, with no libraries or playgrounds and 45 children to a class – then look at the well-furnished offices of officials.”