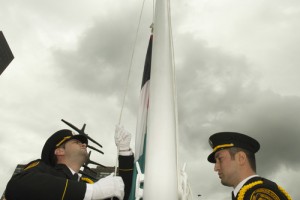 The Palestinian flag was raised at United Nations headquarters for the first time on Wednesday afternoon in New York City, accompanying Palestinian Authority (PA) President Mahmoud Abbas’s speech to the world body on the same day.

At a flag-raising ceremony, U.N. Secretary-General Ban Ki-moon called the event a “day of pride for the Palestinian people around the world” and said it is time “to restore confidence by both Israelis and Palestinians for a peaceful settlement and, at last, the realization of two states for two peoples.”

Yet on the same day, Abbas told the U.N. General Assembly that the PA would stop abiding by the 1993 Oslo Accords, which intended to create peace between the Israelis and Palestinians. Israeli Prime Minister Benjamin Netanyahu said Abbas’s speech was “deceitful and encourages incitement and lawlessness in the Middle East.”

The Palestinians have “non-member observer state” status in the U.N., a designation they secured in 2012.

“For 70 years the United Nations has raised only flags of full member states,” said Israeli Ambassador to the U.N. Ron Prosor, who had called the campaign to get the Palestinian flag raised “another cynical misuse of the U.N. by the Palestinian Authority,” Reuters reported.

Despite recognizing a “State of Palestine” through its ratification of a treaty this past May, the Vatican in August requested that it be removed from a Palestinian-prepared U.N. General Assembly resolution that called for the flags of “Palestine” and the Holy See to be flown at U.N. headquarters. The resolution was prepared without consulting the Vatican. (JNS.ORG)