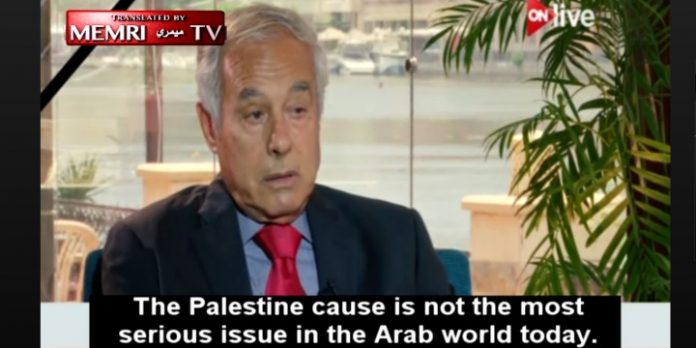 A former adviser to the late PLO leader Yasser Arafat said in a recent television interview that the Palestinian question is no longer the most important challenge facing the Middle East.

Marwan Kanafani — who served as the PLO’s spokesman from 1989-96 and participated in peace negotiations with Israel — told his interviewer, in remarks translated by the Middle East Media Research Institute (MEMRI), that the “Palestine cause is not the most serious issue in the Arab world today.”

“There are more Syrian refugees today than Palestinian ones,” Kanafani, a member of the Palestinian Legislative Council, remarked. “More people were killed in Libya than in Palestine or other countries where we lived.”

Kanafani heavily criticized the current Palestinian leadership for the stasis in negotiations with Israel, as well as the continuing split between the Fatah-ruled West Bank and Hamas-ruled Gaza.

“The political parties and the factions are responsible for that split,” he said. “Over the past decade, we Palestinians have not made any progress whatsoever in our cause, and, as much as I don’t like to say it, we have regressed. Of course, we cannot blame the Palestinian people for this.”

Kanafani ended with a religiously-inflected plea for negotiations to resume.

“Not a single revolution in the world ever ended in a knockout,” he said. “Negotiations are permitted by Islamic law — the Prophet Muhammad negotiated with the infidels in the ‘Hudaybiyya’ [Treaty]…at the end of the day, negotiations determine the balance of power.”

A controversial figure among Palestinians, Kanafani joined the PLO after playing professional soccer in Egypt during the 1960s. His former wife, Deborah Jacobs, published a book detailing her move to the West Bank with Kanafani and the subsequent battle for the custody of their children after the couple divorced.

Kanafani has periodically released details of his time with Arafat in the Arabic press. In 2007, the Egyptian magazine Al-Ahram Al-Arabi published Kanafani’s claim that Arafat was the founder and commander of the Black September terrorist organization — which executed, among other outrages, the massacre of 11 Israeli athletes at the 1972 Munich Olympics.