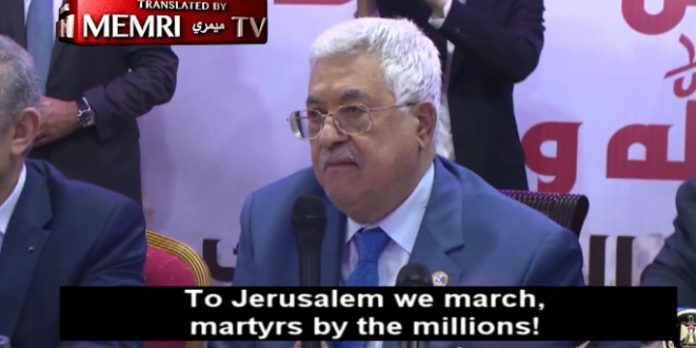 Palestinian Authority (PA) President Mahmoud Abbas recently went on a frenzied rant in which he pledged, “We shall enter Jerusalem — millions of fighters!” it was revealed on Wednesday.

In a video uploaded to Abbas’ Facebook page on August 10 and translated by the Middle East Media Research Institute (MEMRI), Abbas spoke at the Jalazone refugee camp near Ramallah, declaiming, “We shall remain [here], and nobody can remove us from our homeland.”

Presumably referring to Jews, Abbas proclaimed, “If they want, they themselves can leave. Those who are foreign to this land have no right to it.”

In a statement that could have referred to the Israeli settlements in the West Bank, but also to the Jewish state in its entirety, Abbas pronounced, “So we say to them: Every stone you have [used] to build on our land, and every house you have built on our land, is bound to be destroyed, Allah willing.”

“No matter how many houses and how many settlements they declare that they [plan to build] here and there — they shall all be destroyed, Allah willing,” Abbas continued. “They will all go to the garbage bin of history.”

“There” appears to imply Israel proper as opposed to the “here” of the West Bank.

Citing President Donald Trump’s decision to move the US embassy to Jerusalem, Abbas said in garbled language, “Jerusalem, whatever they call it… ‘united’… They moved their embassy… Jerusalem is ours whether they like it or not.”

The audience then broke into a chant: “To Jerusalem we march, martyrs by the millions!”

Referring to the PA’s payment of millions of dollars to imprisoned terrorists and the families of dead terrorists, which has caused the US and Israel to withhold funds from the PA, Abbas stated, “We will not accept their designation of our martyrs as terrorists. Our martyrs are the martyrs of the homeland.”

“We will not allow them to deduct a single penny from their money,” Abbas added. “All the money will go back to them, because the martyrs, the wounded, and the prisoners are the most sacred things we have.”