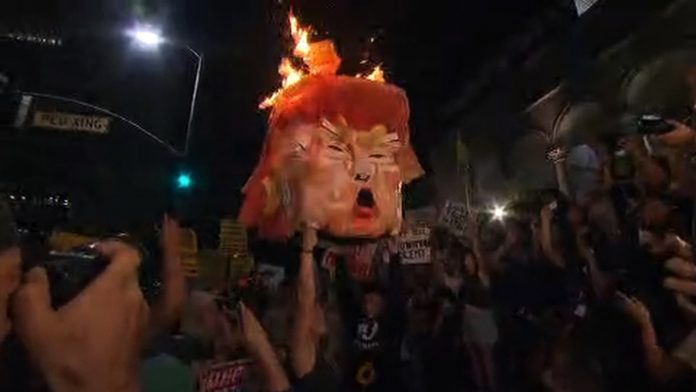 Palestinian Authority leader Mahmoud Abbas’s Fatah movement is publishing numerous photos of Palestinian demonstrations against the U.S-led “Peace to Prosperity” conference currently taking place in Bahrain. The demonstrations, slogans and posters, as well as Fatah’s coverage of the protests, all emphasize Palestinian hate towards U.S. President donald Trump, the United States and Israel, as well as the Palestinian rejection of Trump’s Middle East peace plan and the Bahrain conference.

At a demonstration organized by the PLO in Bethlehem, at which Bethlehem District Governor Kamel Hamid was present and gave a speech, Palestinians hung an effigy of Trump and later burned it.

At another event, a Palestinian dressed as former P.A. leader Yasser Arafat burned a poster portraying Trump adorned with red horns and a swastika, as well as U.S. and British flags, also bearing swastikas, overlaid with a blue Star of David. Demonstrators bore posters with the slogan “Deal of the Devil!”—a reference to Trump’s Mideast peace plan, informally known as “the deal of the century.”

Fatah also posted on its official Facebook page a cartoon portraying participants in the Bahrain conference as stabbing “Palestine” in the back.

The cartoon shows a man holding a knife and preparing to stab a woman—”Palestine”—in the back. The woman’s head covering appears to be in the shape of the P.A. map of “Palestine” that includes all of Israel. A hand is holding out a sack of dollars to the man with the knife.

The rest of this article can be found at the PMW website.