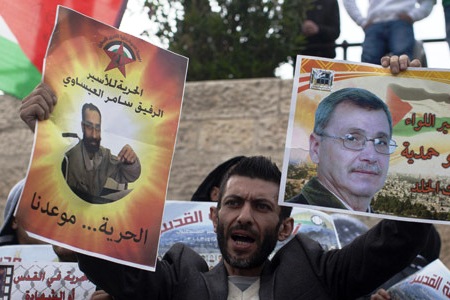 Israel’s refusal to release pre-Oslo Palestinian prisoners based on the amount of time they served in jail is a sign of “ill will,” a Fatah official dealing with the prisoner issue said.

Kadoura Fares, head of the Palestinian Prisoners Club, a nongovernmental organization dealing with prisoners’ rights, told The Times of Israel that the list of 26 prisoners approved for release by the Israeli government seems to have been constructed haphazardly according to Israel’s assessment of the level of danger posed by the prisoners.

The Palestinian Prisoners Club, for its part, called for those imprisoned first to be released first, starting with veteran prisoner Karim Younis, an Israeli citizen jailed in 1983 for the murder of IDF soldier Avraham Bromberg in 1981.

“It’s not clear to me what the ministerial committee [which authorized the release] wanted to achieve,” Fares said. “What does it gain by postponing the release of prisoner X or Y by two or three months? It’s a sign of ill will.”

Israel, he said, did not consult the Palestinian Authority when deciding which prisoners to release first, but did choose the names from a list submitted by the PA.

Fares added that the prisoner release was intended to create a new atmosphere of trust between Israelis and Palestinians, but has instead been used by Israel “to twist the Palestinians’ arm.” He feared that Israel would not follow through with the release of all 104 pre-Oslo prisoners, including 14 Arab Israelis, meant to take place in four stages over nine months. Read more here.