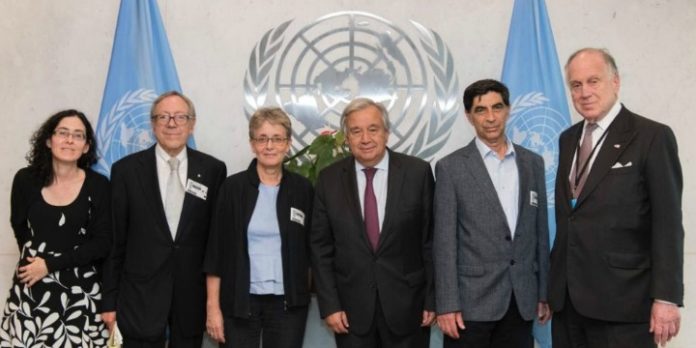 The parents of the late Lt. Hadar Goldin — one of two IDF soldiers who fell in battle in the Gaza Strip five years ago during Operation Protective Edge and whose bodies were kidnapped by Hamas and are still being held by the terrorist group — met in New York on Thursday with UN Secretary-General Antonio Guterres.

A statement put out by Leah and Simha Goldin on Friday said that, during the meeting, Guterres called for the “unconditional and immediate return of captive IDF soldiers held by Hamas” and expressed support for “UNSC Resolution 2474 from June 2019 on prisoners and missing persons as a condition and first step to any end-of-conflict agreement.”

The Goldins also quoted Guterres as saying the UN would “monitor the issue of prisoners and missing persons in every UN report on Gaza” and that he would “raise the issue during meetings with relevant heads of state next month at the UN General Assembly and will instruct his Middle East envoy, Nickolay Mladenov, to act in light of UN Resolution 2474.”

Leah Goldin hailed these comments as an “unprecedented breakthrough.”

“The practical significance of what Mr. Guterres told us is that from now on, any UN member state including the US, EU, Arab states or other donor nations interested in investing in Gaza must act to bring back Hadar Goldin and Oron Saul first as part of any end-of-conflict agreement under UNSC Resolution 2474,” she said.