By Rabbi Mordechai Kamenetzky, Rosh Yeshiva of Yeshiva Toras Chaim at South Shore
“Clothes,” they say, “make the man.” But did you ever wonder about the man who makes the clothes?

This week’s parsha discusses the priestly vestments worn by both the common kohen and the Kohen Gadol. The common kohen wore four garments while the High Priest wore eight.

The garments of the High Priest were ornate and complex. They needed highly skilled artisans to embroider and fashion them. They included, among others, a jewel-studded breastplate, a honeycomb-woven tunic, an apron-like garment and a specially designed garment that was adorned with gold bells and woven pomegranates.

To weave these garments was quite a complex task, and Moshe had to direct the craftsmen with the particulars of the difficult sartorial laws. Yet when Hashem charges Moshe He described the function of the garments much differently then He did in telling Moshe to command the tailors.

Moshe himself was told by Hashem that the objective of the garments was for glory and splendor — surely wonderful, but very physical attributes. Yet when he is told to command the artisans, the message he is told to impart was quite different. “You shall speak to the wise-hearted people whom I have invested with a spirit of wisdom, as they shall make holy vestments to sanctify and minister for me.” (Exodus 28:1-3) “The clothes,” Moshe tells the tailors, “were not meant for glory or splendor; they were to sanctify and to minister.” Why the change in stated purpose?

A Long Island rabbi attended a taharah (ritual ceremony to prepare a deceased Jew for burial) for an individual whose background was rooted in a Chasidic community. Chevra Kadishas (burial societies) are often immune to the emotions, trauma and dread that would normally accompany a dead soul on a table.

The Chevra did their job almost perfunctorily, with hardly a word spoken, and that did not strike the rabbi as strange. Years of working with cadavers can numb the senses of even the toughest men. All of a sudden, a murmur bounced back and forth between Chasidic members of the Chevra. “Er hut a visa? (He has a visa?)” they queried. Then the conversation took a stranger turn. They began to mumble about a first class ticket.

The rabbi became concerned. Why was anyone talking about travel plans during this most sacred of rituals? That was not the time nor place. It just did not make sense.

Immediately the room became silent, it was now filled with awe and a sense of reverence. “Er hut a visa!” exclaimed the senior member of the group. The entire Chevra nodded and the atmosphere suddenly transformed.

They continued to prepare for the funeral as if the deceased had been a great sage or Chasidic Rebbe. The rabbi was unable to understand the sudden change in atmosphere until the eldest man beckoned him. “Come here,” he said. “I’ll show you something. The old man lifted the arm of the deceased to reveal seven numbers crudely tattooed on the dead man’s forearm. “Do you know what they are?”

“Of course,” replied the Rabbi. “They are the numbers that the Nazi’s tattooed on every prisoner in the concentration camps.”

“No,” the old man said. “These numbers are the first-class ticket to Gan Eden. They are the visa and they are the tickets. Period.”

The badges we wear have different meanings to every individual. Moshe, the man of G-d who saw the world with a profound vision of spirituality, was told about the more mundane aspect of the priestly garments. “They are for glory and honor.” But he is told to charge the artisans, who often see only the splendor and glory of the corporeal world, with the true purpose of the garments — “to sanctify and minister.”

Often we see numbers, events, and even garments as the mere manifestation of natural events whose memories impart us with only of a sense of awe for the history or beauty within. Sometimes we mortals must be reminded of a sense even greater than glory and splendor — ministration and sanctification of G-d’s name. 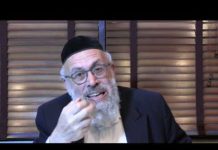 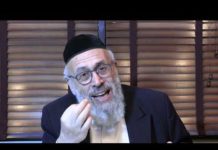