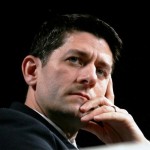 Despite pleas from Republican leaders and the conservative commentariat, Rep. Paul Ryan maintained that he will not seek the House Speaker role Friday.

Rep. Kevin McCarthy shocked the political world by taking himself out of the race the day before. Despite Ryan saying “I will not be a candidate” immediately after McCarthy withdrew, pressure has mounted for him to reconsider.

This morning, the former VP candidate’s spokesperson reiterated that while he “appreciates the support he’s getting from his colleagues,” Ryan is “still not running for Speaker.” Read more at Talking Points Memo.