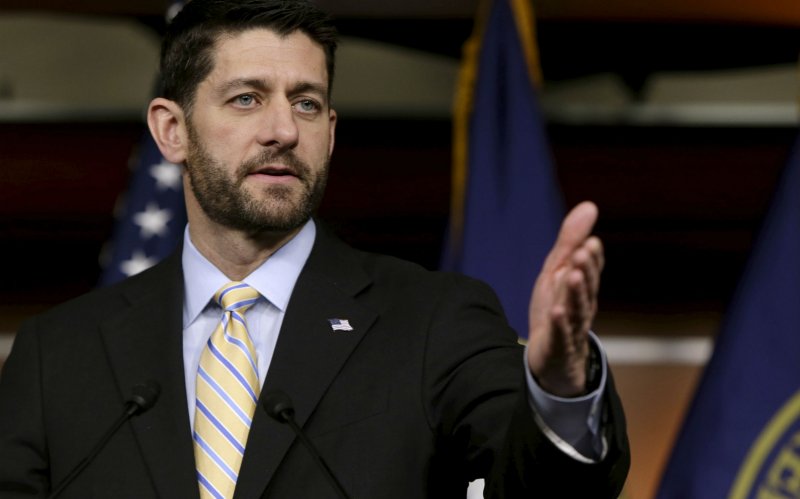 House Speaker Paul Ryan’s red-brick Georgian revival house in this tree-lined, kid-filled Midwestern neighborhood has long been his “refuge,” as his wife calls it, from the divisive world of politics. But no more – not in this Donald Trump-fueled, anger-filled year for a Republican Party leader facing a primary challenge.

Fuming activists have inched close to the Wisconsin congressman’s property several times as part of protests that have drawn the notice of the U.S. Capitol Police detail that watches his residence. A nearby billboard has portrayed Ryan as soft on terrorism. At one sidewalk standoff, his primary opponent – Paul Nehlen, a 47-year-old businessman with tattooed biceps and a deep affinity for Trump – cast Ryan’s backyard fence as an elitist barricade that protects the speaker while his constituents are exposed to the dangers of illegal immigration.

“You should tear down your wall and show everyone that you will live under the same conditions as they do,” Nehlen declared last month as his backers, in matching navy blue T-shirts, stood in front of Ryan’s bushes. They nodded solemnly as he called Ryan a tool of “corporate masters.”

Perhaps the most unsettling moment came when a group of mothers whose children had been killed by illegal immigrants staked out Ryan’s home while he was inside and tried to confront him with poster-size images of the deceased. Breitbart News, the conservative outlet that has extensively chronicled Nehlen’s bid, wrote that “Ryan and members of his security detail fled from his guarded estate” after he was spotted slamming a door on his porch.

A blurry picture of the departing motorcade was pasted on the website alongside the article, which has drawn thousands of comments, nearly all of them harshly critical of Ryan.

This is the bracing new reality for the speaker. Though he is expected to easily win on Aug. 9, Ryan and most Republican leaders find themselves caught in an incendiary populist vortex that is unrelenting in its animus toward seasoned elected officials, in particular those like Ryan who have encouraged bipartisan immigration reform.

“It’s a weird time,” said former secretary of education William Bennett, a Ryan confidant for decades. “He’s doing everything he can to be Paul Ryan, the guy from Janesville who goes to the county fairs and who used to drive around the Oscar Mayer Wienermobile. But it gets nasty when they don’t leave the house, the wife and kids alone.”

Trump has inflamed the embers. The mogul coyly said in an interview with The Washington Post earlier this week that he was not yet ready to endorse Ryan, possible payback for the delayed and pro-forma endorsement Ryan gave earlier this year to Trump. Trump’s move was extraordinary – a presidential nominee refusing to back his party’s House speaker – and instantly jolted Nehlen from obscurity to the roiling edge of the Republican hurricane.

Trump’s wavering lasted until Friday night when, under intense pressure from party leaders, he relented and endorsed Ryan at a rally in Green Bay.

“He’s a good man,” Trump said with muted enthusiasm. “We may disagree on a couple of things, but mostly we agree.”

Nehlen had driven to the event, about a three-hour drive north and outside of the district, to be with his people. His crushed supporters took bitterly to social media in the aftermath, though Nehlen said in a statement that Trump’s “early refusal” was more telling.

“Happy Warrior returns home,” Nehlen wrote in a Twitter post after the rally, smiling in a selfie with his Trump-style red tie loose and clutching a Trump campaign banner he called a “hard fought trophy.”

Trump’s needling began months ago when he held a rally in Janesville in late March ahead of the Wisconsin GOP presidential primary, which he lost to Sen. Ted Cruz, R-Texas. Supporters booed Trump’s mention of the town’s favorite son.

“How do you like Paul Ryan? You like him?” Trump asked the crowd. “I was told to be nice to Paul Ryan.”

Ryan supporters, then and now, have shrugged at those theatrics, pointing to Cruz’s double-digit victory over Trump, which included a 19-point win in Ryan’s suburban and blue-collar district, as compelling evidence of Trump’s limited political capital in the state.

GOP leaders in the state and community have flocked to Ryan’s side as he dealt with Trump’s lingering spite. Gov. Scott Walker and Sen. Ron Johnson (R) of Wisconsin did not attend Trump’s Friday rally. Republican National Committee Chairman Reince Priebus, who grew up in Kenosha, Wisconsin, and is close with Ryan, played a central role in getting Trump to back down.

As GOP forces rush to protect Ryan from the wrath of Trump, stars from the conservative counter-establishment – former Alaska governor Sarah Palin, columnist Michelle Malkin and author Phyllis Schlafly, among others – have continued to stoke the fury here, with the faint and fading hope that Nehlen could close the gap in the final days and score an upset similar to the one in 2014 that toppled then-House Majority Leader Eric Cantor, R-Virginia.

“I think Paul Ryan is soon to be ‘Cantored,’ as in Eric Cantor,” Palin predicted to CNN in May. Minutes after Trump’s endorsement of Ryan on Friday, she took to Facebook to buck up Nehlen’s base, writing, “Wisconsin, please vote for this man ‘of the people’ this Tuesday!”

The races are not the same, though. Ryan has remained ubiquitous in his district after becoming speaker and spent more than $600,000 over the past month on television ads. Cantor was criticized for his lack of a presence at local events, dismissed the appetite for an alternative and thought that he would comfortably coast right up until the results started coming in.

Nehlen’s top advisers, Noel Fritsch and Eric Odom, bring with them experience with past insurgent conservative campaigns. Fritsch worked in the Mississippi Senate primary two years ago that drew national attention for its discord, and Odom was one of the original organizers of the tea party movement. Politico has reported that a handful of former Trump campaign staffers have traveled to Wisconsin to volunteer.

On Saturday, firebrand commentator Ann Coulter crisscrossed the sprawling southeastern Wisconsin district with Ryan’s rival, and some Democrats have been planning to vote for Nehlen in what is usually a sleepy open primary, with the mischievous, if unrealistic, aim of making Ryan’s margin of victory narrow – especially if turnout is low.

Ryan’s district has seen its share of economic turmoil in the past decade, which Nehlen’s campaign insists makes his message and his emphasis on his time on factory floors, when he worked for a water-filtration company, right for the times. Janesville is home to a General Motors plant that shuttered in 2009 and once employed 7,000 workers. Many of the white working-class and middle-class people in the area commute to corporate and service jobs in Chicago, Milwaukee and Madison, Wisconsin.

At a news conference this week in Kenosha, Nehlen said anyone who doesn’t believe he has a chance is buying into the “narrative” of the political class.

In Trumpian fashion, Nehlen railed against the “worst” trade deals and against Ryan for “funding everything the Obama administration wants, and more, and they were shocked at what they got.”

“What’s Paul Ryan done?” Nehlen, in his flat monotone, asked as reporters and camera crews stood silent. “Paul Ryan has gone to mountain estates, behind closed doors to talk about, hmm, what do they talk about behind those closed doors at those mountain estates? They talk about bringing cheap labor into this country and flooding, flooding this country with as much free labor as we can possibly get, so we can keep the wages low.”

Nehlen’s peculiar, even menacing, approach has been a constant throughout the campaign, beyond the scrums near Ryan’s lawn.

On Twitter, he has skewered Ryan’s longtime associates Dan Senor and Cesar Conda as “puppets of billionaires” and scheming “globalists.” On Monday, he suggested there should be a “discussion” about deporting all Muslims from the United States, later saying he meant only “sharia compliant” Muslims.

Ryan hasn’t hidden his frustration. “It’s kind of petty to actually do that, to go to a person’s house,” he told a local television station last month. “Having a backyard fence for three dogs and three kids is not a half-bad idea.”

Ryan was worried about the personal attacks coming so close to his wife and children last October, when he was hesitant to become speaker. “I genuinely worry about the consequences that my agreeing to serve will have on them,” he said then. “Will they experience the viciousness and incivility that we all here face on a daily basis?”

Ryan said Friday on local host Jay Weber’s radio show that Nehlen’s campaign is fueled by “scam PACs” and “out of state” donors.

“They’re not pushing conservatism. They call this alt-conservatism,” Ryan said. When Weber said his foes had ties to white supremacists and fringe elements, Ryan did not argue the point.

“It’s a nasty, virulent strain of something,” Ryan said, repeating the host’s words back to him. “I don’t even know what it is other than that it isn’t us. It isn’t what we believe in.”

Ryan’s campaign, typical of a well-known incumbent, has assiduously avoided doing anything that would give the race a whiff of competitiveness. He has not accepted Nehlen’s debate invitations, and Ryan’s spokesman has declined to share an advisory of his campaign stops with reporters. Instead, he has sent a listing of Ryan’s radio interviews.

“You guys came in to cover a race that’s not close,” a Ryan aide wrote in an email Thursday.

Brian Baker, president of the Ending Spending super PAC aligned with the wealthy Ricketts family that owns the Chicago Cubs and backs Ryan, said his group has closely monitored the race and commissioned private primary polls. After reviewing its data, he concluded that Ryan was safe and no outside support was necessary.

Whatever the result, Ryan will move forward with battle scars, which makes the contest at least intriguing – and depressing to Ryan allies.

No longer is the party’s highly respected 2012 vice-presidential nominee totally at ease in the district he has represented since he was 28. The winds that have lifted Nehlen still swirl on Capitol Hill, where the speaker has struggled at times to keep together his raucous Republican conference.

“What I’d tell Paul is, ‘I told you so.’ When he was thinking hard about becoming speaker, I said it was always going to be one rough ride,” Bennett said. “He anticipated the wayward members part of it, probably not Trump.”