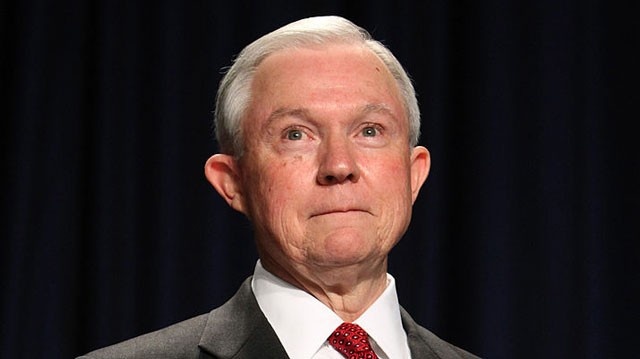 House Minority Leader Nancy Pelosi called on Attorney General Jeff Sessions to resign after The Washington Post and The Wall Street Journal reported Wednesday evening that he spoke with the Russian ambassador during Donald Trump’s campaign.

In a statement released late Wednesday, Pelosi said Sessions is “not fit to serve as the top law-enforcement officer of our country.” Sessions, she said, “lied under oath during his confirmation hearing before the Senate. Under penalty of perjury, he told the Senate Judiciary Committee, ‘I have been called a surrogate at a time or two in that campaign and I did not have communications with the Russians.’ We now know that statement is false.” The ranking member of the House Oversight Committee, Rep. Elijah Cummings (D-MD), also called on Sessions to resign, saying his statements to Congress about his Russia communications were “demonstrably false.”

The Washington Post reported earlier Wednesday that Sessions had spoken to Russian Ambassador to the U.S. Sergei Kislyak twice last year while serving as Trump’s surrogate. In a statement late Wednesday night, Sessions said “I have never met with any Russian officials to discuss issues of the campaign. I have no idea what this allegation is about. It is false.” Read more at THE HILL.